I don’t know what’s going on but I’m rollin’ with it.  She slept last night from about 7:15 all the way to about 5:30.  I fed her and she slept again until about 8:00.  Wow.  I think I might be done talking about sleep for a while.  Thoughts of sleep (or the lack of it) had taken over for a while but I’m wondering if maybe she’s ok sleeping again.  I’m still proceeding with caution and not taking it for granted but still so thankful to get some rest!

(I love how that Handel guy looks).

Ya, she slept from 8:30 to 5:30 – NINE HOURS!  She woke up and fidgeted and stirred several times but she found her way back to sleep without any help from us.  I’m so proud of her!  She needed her rest.

The stupid part of last night?  I was awake for around 2 hours in the middle of the night.  Not because my baby was up.  Just cuz.  Nooooooo!  Maybe it’s the cold I’ve caught, maybe I’m just not used to sleep anymore, I don’t know why but man, I wish I had slept.  Whatevers – I’ll take the win!  We’ll see how tonight goes!  I’m not fooling myself – we might have just been lucky for two nights and this could be a fluke, but I’m ecstatic about the last two nights.

Keeping my fingers crossed and still full of hope, yours truly,

After I posted about the difficulty I was having deciding on whether or not we should start sleep training our baby yesterday, our answer became very clear.  After 45 minutes of rocking, random screaming, fussing, fighting and singing, I just had a breakdown.  My poor husband patiently calmed me down while our little one wailed in the next room. 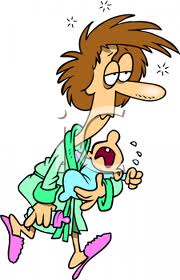 “That’s it.  She’s going to have to cry tonight.  I’m done.” and “I can’t take it anymore!” and “I love her and I want to give her what she wants but I can’t do this for the rest of our lives!” and I think my favorite – “Maybe I should go back to work.  Maybe I’m not cut out for this!”.  As if going back to work would make things easier, not harder.  The melodrama was impressive, if I do say so myself.  My poor husband.  Dealing with both of us.  It didn’t help that both baby and I are sick.  And tired.  So we decided we were going to do it.   We would go back in to her room in 5 minutes.  He went in and put her down and walked downstairs to the garage for some reason.  I sat on the computer and listened, frustrated and angry.  Why?  I dunno.  She pissed me off with all the body rigidity and random screams and the whole I’m-not-gonna-sleep-and-you-can’t-make-me.

Then a crazy thing happened.  All the noise stopped.  Whaaaaaa?  She had fallen asleep.  Just like that.  We watched as she fussed a little, tossing and turning, covering her head in the blanket (why on god’s green earth does she need to cover her face???  Doesn’t she know I’m deathly afraid she’ll suffocate?  Seriously, is she trying to kill me?  Oh, by the way, I like sleeping underneath my pillow instead of on top of it.  No connection, right?  Riiiight.).  She moved on to froggy formation, with her little legs bent and her little arms bent.  Asleep. Adorable.  How could this be?  We’ve been fighting her every night for the last umpteen nights and here she was, giving us the finger.  Awesome. 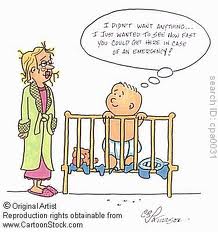 That was at around 8:30.  But would she stay asleep?  Not bloody likely.  But she actually did pretty well.  She slept until about 12:00.  When I heard her cry, I braced myself for a battle that could last at least a few hours.  The plan was to let her cry for five minutes, and then go back and reassure her.  Return in 7, then 10, the 15.  By the time I got to her room, she was already standing up in her crib.  I laid her down, she yelled, sat back up and yelled some more.  I put her down again. She popped right back up.  I put her down and walked out the room.  By the time I got back to our room and looked in the video monitor, she was standing up in her crib again.  Fuuuuu…you know the rest.  I turned off the sound because I can hear her from her room and the monitor just made it so much worse.  We watched her sit down and rub her eyes.  Then lie down and roll around her crib, trying to find that elusive nymph, Sleep.  But she did – back in froggy formation, precious (and with her head under the blanket again, dammit!).  I went and fixed it and she slept for another 4 hours!   In less than 7 minutes!  Showed us.

She did it again at 4:30 or so.  But she wasn’t up for very long and put herself back to sleep and slept again until almost 7:45!  What the eff is going on here?  I don’t know but I like it!  I’m not kidding – just earlier this week she had been waking up every hour and a half, sometimes every forty-five minutes, wanting to be held and rocked.  Crazy.  We think it’s because she’s sick or maybe because she had vaccinations the day before.  Whatever the reason, we’ll take it.  Even though I never slept more than 4 hours, I still felt so much better this morning.  And when she woke up, her dad and I went in her room and she was standing in her crib.  And she smiled at us, our happy baby.  It was a good night.

I know that I can’t expect tonight to go this well but last night gave me some hope.  She took a 2.5+ hour nap this afternoon and I put her down in her crib sleepy but awake tonight.  She didn’t cry.  Just fussed and rolled and played with the mirror in her crib, the slats, and moved around til she found her old friend, Sleep.  Froggy formation won again.  She’s been sleeping for about an hour and a half and I heard her wake up but she put herself back to sleep, which is what sleep training is meant to do.  I’m still hopeful about tonight but I’m scared.  We’ll see what happens!  Here’s a picture of a sleepy animal.  Cuz it’s cute.  That’s why. 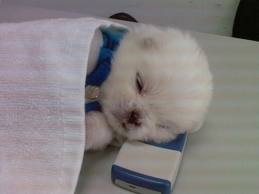 Being a parent is hard.  Or at least it is for me.  Just when you think you have something figured out, bam – it changes.  My baby used to sleep well at night.  She would wake up in the morning and my husband and I would eagerly go in her room to find a smiling, laughing, well rested baby.  What happened to that family?

Now a typical morning follows at least 4-5 wake ups throughout the night where we have to help baby get back to sleep.  I’m in her room, on the full sized bed, trying to get her to sleep just a little while longer because it’s so hard to get out of bed while my husband is in our room trying to get just a little more rest because he has to get to work soon.  She’s crying and I want to cry.

I feel like a failure.  Unfortunately, sleep philosophies are in round 1,259,390 of a boxing match in my head right now.  In this corner, we have sleep training.  In its most extreme form, it requires me to let her cry for as long as it takes until she puts herself to sleep in her own crib, by herself.  If she learns how to fall asleep on her own, she’ll be able to sleep through the night and she’ll be well rested.  In the other corner is a more natural, co-sleeping solution where she can sleep with us and I pick her up when she cries and give her what she needs and what she wants.  Maybe a happier baby, but probably less sleep for me.  But maybe my baby is just a little happier.

Both seem painful to me.  I can’t help but worry that if I leave her to cry in her crib, she will feel like we abandoned her and don’t care.  The thought of that makes me cry.  Like right now, while I’m writing this.  What if it somehow impacts her long term sense of self or leads her to feel less loved or worse – what if it leaves her with an unsettling craving for love?  And it’s g-d painful to hear her cry.  She doesn’t just whine.  She bawls like she’s in pain, like someone is hurting her.  She crawls around her crib and pulls up to the very front and looks for us.  She chokes and coughs.  It’s terrible.  But the last time we did this, it worked.  She started sleeping through the night in three nights and each night got easier.  But I’m afraid that it will suck the life out of her.

If we continue the way we have been, picking her up and rocking/singing/humming to her when she wakes up, it’s bad too.  On this side, I fear that it will create bad habits – if baby cries, baby can get her way.  Everyone does what baby wants.  On top of that, I’m exhausted.  I’m putting on weight, I have a cold, and I haven’t had more than 5 hours of sleep in…gosh, I don’t know how long it’s been.  I don’t see how I can give her my best if I’m constantly like this.  Her daddy needs to go to work.  He’s exhausted too.  I find myself doing things that don’t make sense.  Sent a senseless email the other day.  Almost squeezed toothpaste into my contact lens kit.  I almost fall down while walking into her room at night to go get her.

Today our pediatrician asked how she’s sleeping.  I told her.  She looked at me in disbelief and said “It sounds like there’s some manipulation going on.”  I feel stupid and incompetent (and tired, did I mention tired?).  My mom’s friend is a pediatrician. She told me I should just leave her and let her cry for as long as I can handle it.  It just feels so counter-intuitive to me to leave her to cry.  My husband and I talk about this often.  If we were living out in nature, would our baby be sleeping in her own cave?  If she woke up at night, would we just let her cry it out so that the tigers could find her and eat her?  No.  So why does it make sense for us to let her do this in our home if it’s not the most natural thing to do?  Because her crying is inconvenient?  I dunno.  I know we all need the rest and sleep training just makes sense.  Certainly what we’re doing is not good for anyone.  I think it’s time for a little tough love.  Wish us luck!