Growing up, I didn’t have grandparents.  Well, technically I did.  I had a maternal grandmother and a paternal grandfather that both lived in India.  I was born and raised here and in our simple little imaginations, my brother and I suggested multiple times that they should marry each other.  We had never really known them.

My grandmother fought my Mom off for years when it came to coming to America.  She was a widow and only had one living child – my Mom.  But her health started failing and my parents insisted and went to India and brought her back home with them.  So at last, at 20 years old, I had myself a Ba.  She lived with my parents in the guest room downstairs.  She was legally blind and came with a slew of health issues that my parents diligently cared for.  After about a year, her health improved enough to where she was pretty comfortable.  My gujarati language skills improved dramatically and we taught each other all kids of things.  She asked about me the days of the week, “Monday, Tuesday, Birthday?” and I FINALLY learned to count past 16.  Despite coming from a different world, she never (ever) commented on my choice in revealing clothing, the way I came home late at night, the way I had male friends visit, or even that I ate meat.  You have to understand that for someone of her generation from where she was from, this is pretty remarkable – all of those things were pretty “bad.”  She only had a sixth grade education but in many ways, her mind was open and accepting. 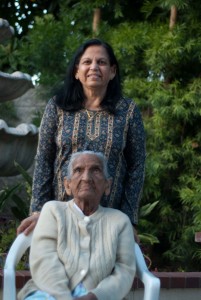 When I was around 23 years old, I came home for a visit (I think I lived in LA so I’d come by on weekends) and she said “All my responsibilities are over. I have lived a good life.  The only thing remaining is to see you get married.”  Sigh.  Oh, the guilt trip laid forth by Indian mother is amplified many-fold when that mother is a grandmother.  But lo and behold, three years later, I was engaged.

I don’t know if she told me things because I was her only granddaughter or because she wasn’t comfortable telling my mom, but she did.  She seldom showed my mother compassion or a soft side but frequently praised her and showed sympathy for her daughter by telling me.  In the 19 years she was here in the US, I only saw her cry once.  At my wedding.  She loved me.  I know she did.  She could never say it to me.  She could never praise me, but she loved me.

Fast forward a few more years and her kidneys really started failing.  A few months before we found out we were pregnant, she was hospitalized.  She went through the speech again about how her responsibilities were through and she was at peace with her life but the only thing left is that she hadn’t seen was my kids.  Mind you, at this point, she had eight great grandkids…but she had a funny way of motivating.  I wasn’t sure she’d be around long enough to meet great grandchild #9 but she was.  And then even #10. 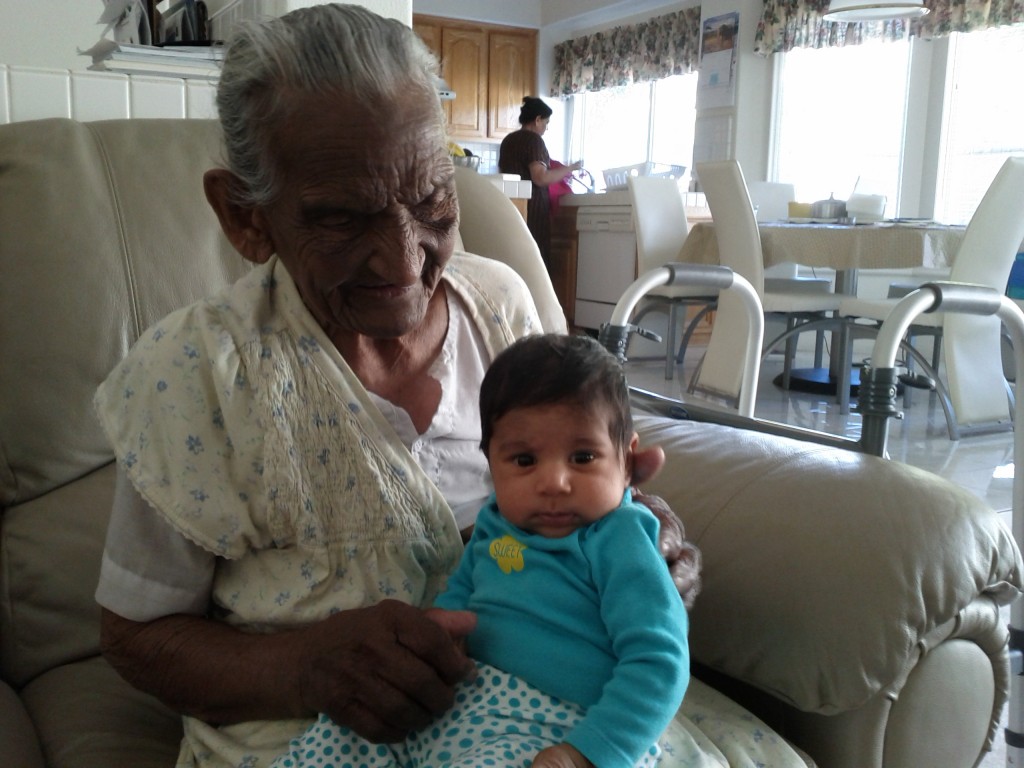 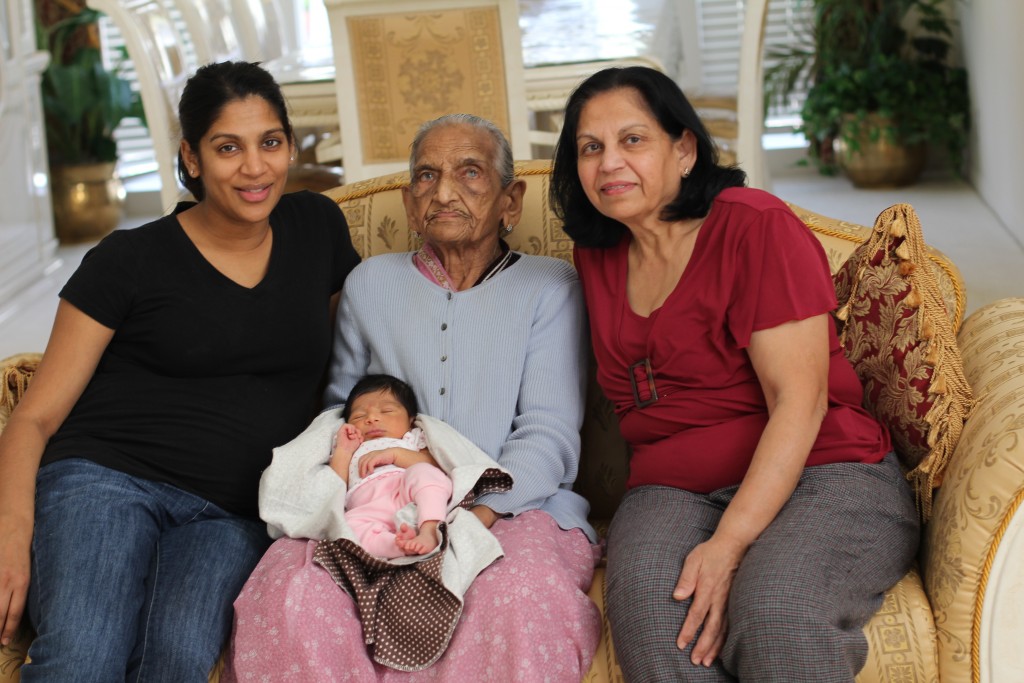 The last five years have been difficult for her and my parents as caretakers.  She was going to dialysis  3-4 times a week, on a myriad of medications, having back pain; all kinds of stuff.  But she still bathed herself, went to the bathroom by herself, brushed her teeth and combed her hair by herself.  My parents became less comfortable leaving her at home alone.  Even when they did, mom would be worried about her and couldn’t enjoy.  The truth of the matter is that her body was failing her.  She did the dialysis for over four years.  All the while, I couldn’t help but wonder what she was getting out of this life she was living.  When I think about all that she had seen in her life – poverty, the deaths of several of her children and her husband, coming to a country where she didn’t speak the language – I’m in awe of her resiliency.  What on earth would keep her keepin’ on?  Yes, she loved her baths – she would be in the bathroom for literally 4+ hours.  She liked watching the news and for a while she even watched Indian soap operas.  But I think it was us, her family, that kept her going.  We somehow brought her joy.  She’d be exhausted but if one of her great grandkids showed up, she perked right up.  She would try to lift my little ones.  She would offer to watch them so I could eat (I mentioned she was pretty much blind, right?).  Despite the effort, she would come to the garage door to wave goodbye to us as we left.  She couldn’t see us waving back but I’m thinking maybe she could feel it. 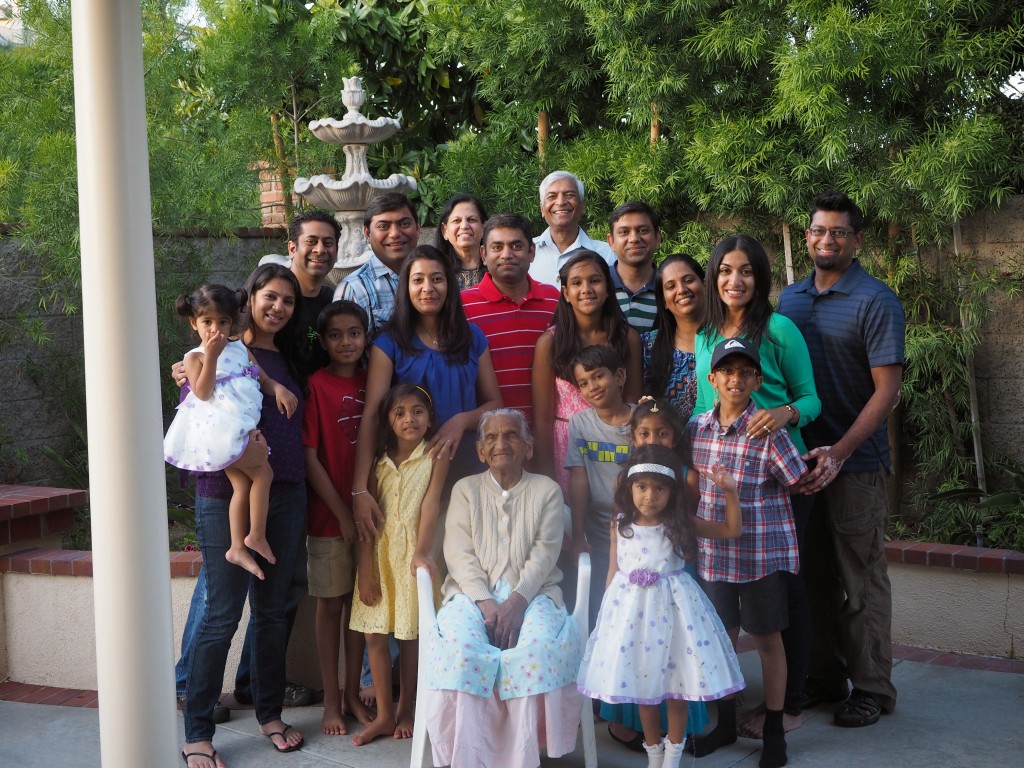 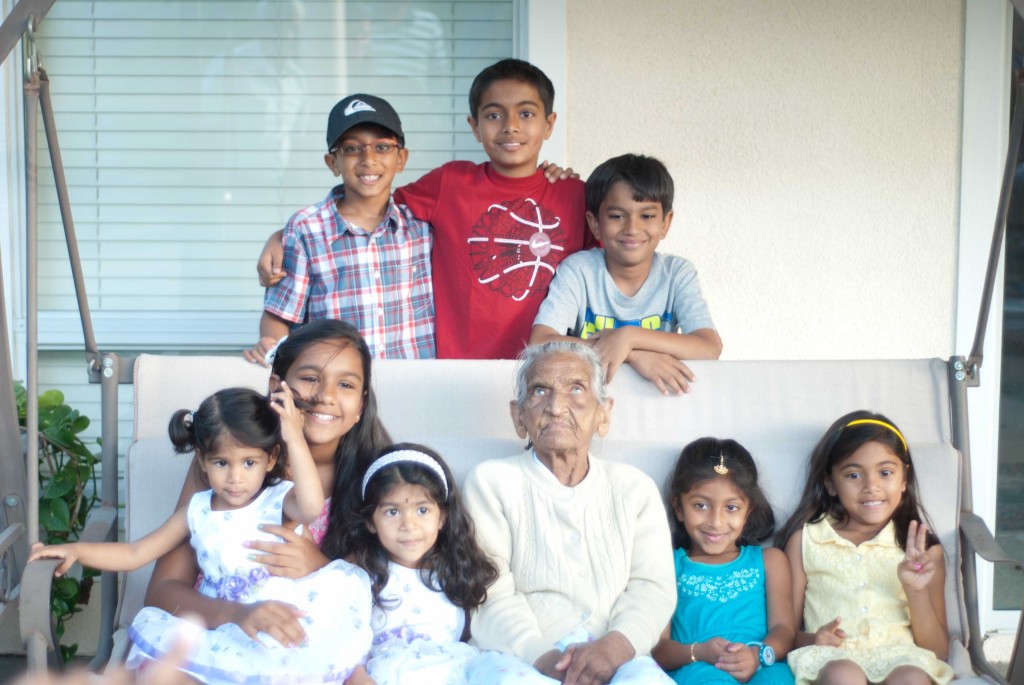 Although her body starting failing her, her mind was sharp as a tack.  Remembered every birthday, anniversary, and obscure relationship between people she barely knew.  So when she said she didn’t want to go to dialysis, we listened.  In the past, there had been days when she was tired and frustrated and fed up and upon returning home from dialysis would say she was done.  But sure enough, she’d be dressed and ready when the next appointment day came around.  This time was different.  She had her normal dialysis on Friday.  On Monday she said she didn’t want to go.  She was calm.  Not angry.  Not upset.  Just matter of fact.  My parents ensured that she knew what this meant.  They rescheduled for Tuesday just in case.  My cousin came over and tried to convince her.  No dice.  She was done.

Home hospice care was the next step.  The nurse was kind and the process really helped to put things into perspective.  To all of our surprise, she lasted almost two weeks without dialysis.  This is mostly because she wasn’t drinking or eating much.  It was a weird time in our lives, waiting for her pass.  It was scary and peaceful and just plain weird.  But it was comforting knowing that we didn’t have to wish or hope or fight for things to turn around.  The goal was to keep her comfortable.

My mom isn’t one to ask for help.  To this day, my parents try to protect me from the unpleasantries and uglies that life has to offer.  I had been calling a couple times a day to see how mom and Ba were doing.  Everyday I would ask “should I come?” and my mom would say “No, I think it’s ok.  The nurse says it’s not time yet.”  I hadn’t been to their house in two days and I called, thinking that I’d go on Friday (it was Thursday).  Sounded like Ba was ok, no big changes.  I asked, “should I come?” and to my surprise, my mom said “Ya, why don’t you come.”  I don’t know if she needed me or maybe she had a feeling.  So my husband came home to watch the littles and I went.

She wasn’t able to talk much at that point.  She was in and out of sleep from the morphine.  She could communicate that she wanted water but had a hard time drinking from a straw.  She vomited.  I went to get a syringe to make it easier to give her water.  I was in the room and noticed that her breathing was slowing down.  I got my parents and we were all together.  My mom told her we were all here and that everyone had been coming to see her.  In her last breaths I fed her holy water from the Ganges River.  Then the breath stopped.  It was over.  It wasn’t dramatic.  It wasn’t traumatic like we had been fearing.  It was just…over.

Ba was 85.  She made a decision about her life and how she wanted to go.  In this way, she was blessed.  It was her wish and that makes things a lot easier.  While I’m sad for me, I am not sad for her.  I’m relieved.  Hindus believe that when someone dies, their soul leaves their body and begins a journey to the next body or to return to become one with the universe.  We actually open windows to allow the soul to leave.  I don’t know what that journey is like but I firmly believe that she is at peace.