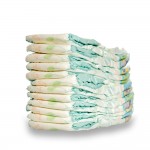 This is one of the questions I see frequently asked in gDiapers conversations.  Do you save money using gDiapers?  My baby (sigh, she’s not really all that little anymore) is fully potty trained.  We took her out of daytime diapers back in October when she was 19 Months old and haven’t been putting a nighttime diaper on her for the last 6-8 weeks (she’s now 26 months old).  So we’re officially done.  I’ve been wanting to write this post for awhile now but my cost analysis couldn’t be completed until I sold off the very last of my diapers, and I shipped them off today (one of the many benefits of cloth diapering – you can actually make some money back!).  So here we are.  A quick background:

I have two kids; I started using gDiapers with my older daughter at around 3-4 months old and came home from the hospital in gDiapers with my second daughter.  For DD1, I used disposables, gDiapers disposable inserts and cloth inserts.  With my second, we used gDiapers disposable inserts and cloth inserts (no disposables).  I was able to use many of the gDiapers and diaper supplies from my first daughter for my second daughter.  And because they’re cloth diapers, I was able to sell most of the reusable pieces and recoup some of my costs.  Side note: I bought and sold over 120 diapers.  It was fun to collect these but seriously, it’s really not necessary.  So let’s get down to the nitty gritty.  Here’s what it cost me:

Alrighty, for you skeptics, there are a few things missing from this estimation. I didn’t include the cost of laundry detergent because I used the same detergent for my diapers as I did the rest of my laundry.  I DID include the cost of the special laundering products that I bought solely for the use of my diapers.  This includes hard water softener, Biokleen bac-out, RLR, and Ammonia Assassin.  I also included the cost of shipping/supplies/ebay/paypal fees to sell the items.  It doesn’t include the cost of my time spent doing laundry or (gulp) online in the gDiapers groups or shopping for gDiapers.  Let’s just say that was an expensive but fun use of my time.

I had trouble figuring out how much it would cost per load of laundry.  Online estimates were anywhere from $.55 to $.85 cents.  I erred on the side of conservative and estimated $375 total (3 loads of laundry per week  x 4 weeks per month x 37 months of diapering).

Sooooo because my mind works this way, I wanted to compare this to what it would have cost us if we used disposable diapers.  I applied a cost of $.26 per diaper because this was the actual amount we spent for diapers for my older daughter.  Then I multiplied an average of 7 changes per day and 30 days per month times 37 months of gDiapering.  Holy smokes.  That’s a lot of diapers.  We’ll assume the cost of wipes would be double since I used cloth wipes along with the disposable wipes we bought.  So if we had used disposables for both, we would have spent $2261.48.  This doesn’t take into account diaper pails or refills that would be required for disposable diapers, so the cost would be slightly higher (around another $100).

We saved $1121.28!  That’s exciting, right?  But there were a whole bunch of other benefits.  Like saving over 7500 disposables from sitting in landfills.  Like not putting chemicals next to my daughters’ most delicate parts.  Like using the product as a gateway to greener habits.  Like finding a community of really great parents.  Like seeing my kids on marketing materials for a company I believe in.  And hell, like seeing my daughters in some ridiculously CUTE diapers.

Your mileage may vary.  My kids potty trained on the early side (about a year earlier than the US average).  So if you’re in diapers for longer, you’ll save even more.  And I was lucky with the gPants.  I was lucky enough to be able to afford as many as I wanted and I bought pretty much at least one of everything I liked when they came out so I didn’t buy at crazy high prices like other moms.   sent out stuff to other gMums for free and gave some pretty awesome deals but ya, there were others that I got at a discount and sold at a premium.  You can’t make any money back on a disposable.

If you take a look at the expenses above, you’ll also notice that a good chunk of the expense is related to disposable items like the disposable inserts and wipes.  I used a lot of those while traveling and I’d say we travel more than most.  So I know we would have saved a few extra hundred dollars there.  And I experimented with inserts – bought the expensive gDiapers brand cloth inserts but in the end found that cheapie, $1 per insert flour sack towels worked best for us.  There are definitely ways to save even more money.

So my conclusion is YES, gDiapering DOES SAVE MONEY.  What do you think?  Did you have a similar experience?  How’s my analysis?  Did I leave anything out?