Miss K is now 45 months old, just a few months shy of 4 years old.  She weighs about 29 pounds (still), is on her way out of 3T clothes and is about 39 inches tall.  She has an awesome/frustrating/adorable/messy head of curly black hair that she likes styled differently everyday.  Her most frequently requested hairstyle is “one braid, like Elsa’s” because naturally, her favorite character is Elsa from Disney’s Frozen.  By the way, I think it’s total BS that all girls want to be Elsa.  She’s not the one who faithfully tried to reconnect with her sister or the one who had an amazing adventure, or who took fate into her own hands or the one who was strong and actually saved herself by a true act of love for her sister.  That was all ANNA and yet…Yet all the girls love Elsa (who, by the way, did barely anything but shirk her familial responsibilities to live in her ice castle so she could dress and walk around more provocatively in her own solitude).  I digress.  Karina loves all things Frozen. 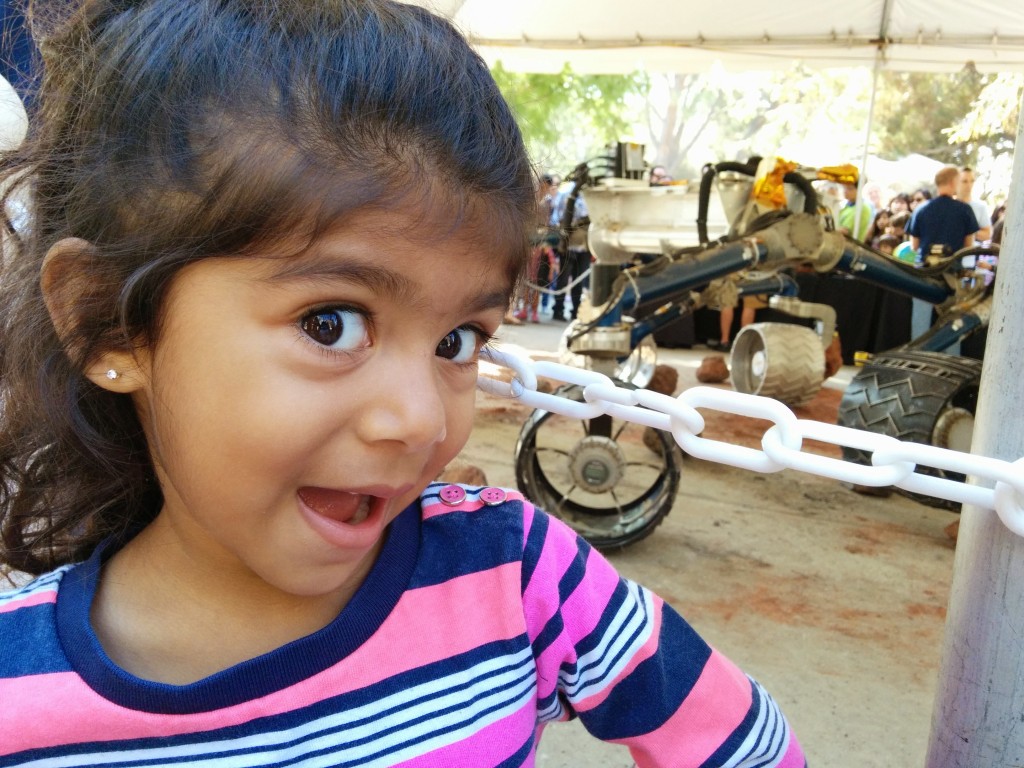 She is able to read.  I’m so happy to see her reading to herself now, not just reading books when we take them out and look at them together.  She’s also writing and can write her name. This learning was really strange.  I would occasionally try here and there to see if she would try to write letters but she wasn’t interested or maybe wasn’t able so I would drop it.  One day I tried by taking out a dry erase marker and her easel.  She wrote the entire alphabet.  Followed by her name.  Granted a few of the letters were goofy but she did it.  She knows the oceans, continents, etc.  She is learning about world geography by doing a world puzzle.  She likes to hear about what countries are on what continents but she sometimes calls them states.  It’s confusing.  Also has been asking to see videos on skeletons and keeps referring to her ibia (?) and fibia (?) and likes to talk about how big her femur is.  Here’s a picture of her in my glasses.  So very intellectual, pensive, and mature looking. 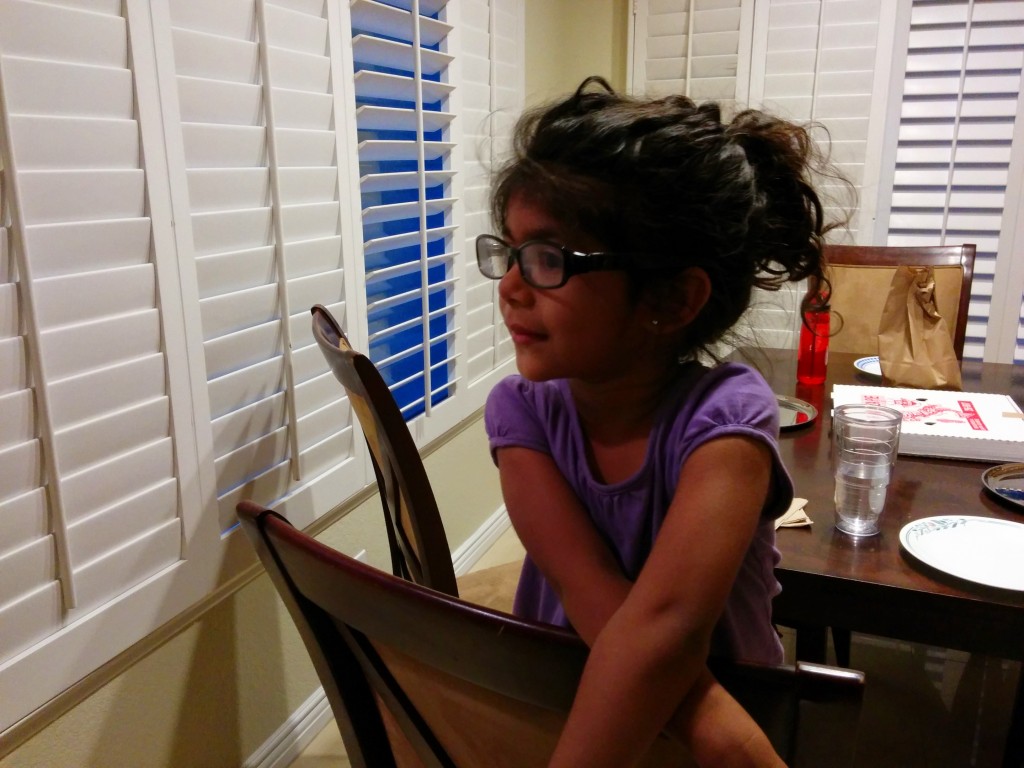 She is making friends at school – she is starting to play with the same few kids every day, it seems.  She’s not just singing songs but also changing the lyrics to amuse herself and me.  Miss K. goes to gymnastics once a week and she loves it.  She’s so much fun to watch.  She likes being around other kids and seems to get along well with others. She still seems to get a little intimidated by loud noises or crowds of kids but her curiosity typically overshadows any shyness she might have.  Over the last few months, she’s started drawing people and objects.

Her favorite activities these days seem to be playing in the sand (she’s no longer painting EVERYday at school), puzzles (man, this hobby is back with a vengeance), books, crafts involving tape, and caring for ailing stuffed animals.  100 piece puzzles are the right level of challenge for her.  She can climb into her carseat and buckle two of the three buckles herself.  And for some reason, she’s still never tried to unbuckle herself.  How great is that?  Also enjoys helping me with preparing food and making her own pretend meals. 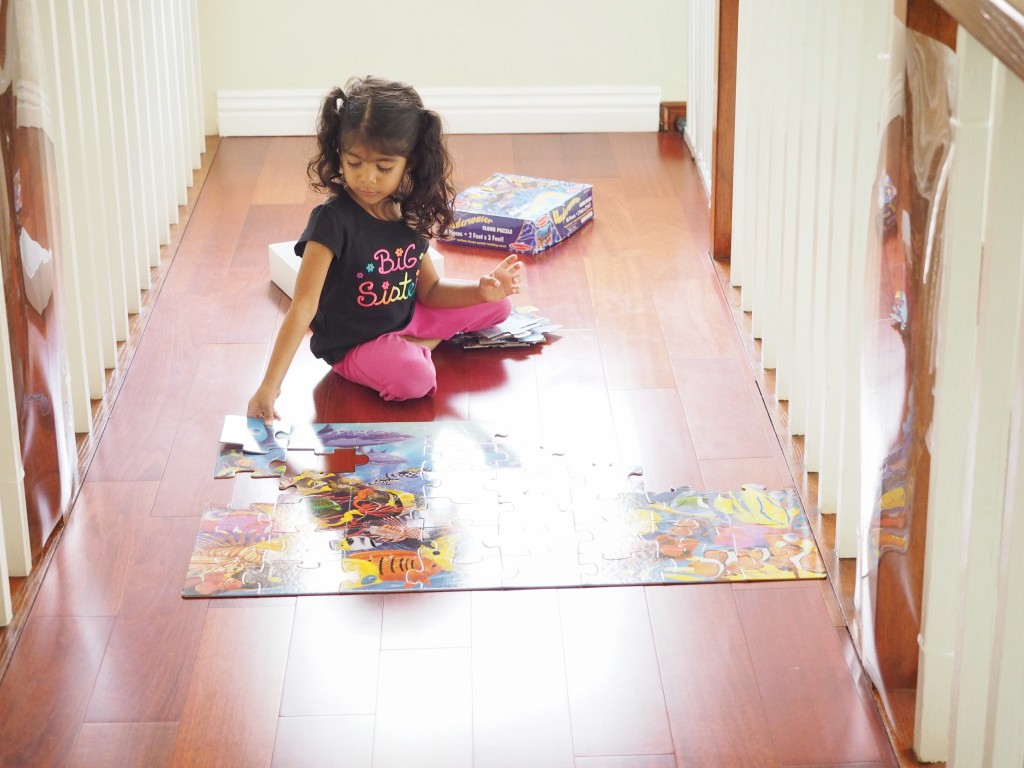 Some of her favorite foods are grilled cheese, burritos, yogurt, peanut butter or sunflower butter sandwiches, fish, and rice.  She’s fancy.  She likes sea bass.  Seriously. You should see her put away fish.  It’s nuts.  Surprisingly, she still loves oatmeal.  Hands down she consumes more oatmeal than anyone else in our family.  She likes most breakfast foods but most often asks for pancakes.  Still loves pretty much all fruit and wants treats all day, everyday.  She’ll take any treat – muffin, cookie, cupcake, ice cream, icee…she’s not particular.  The nice part is that she’s usually accepting when we say that she’s had enough and toss a portion of the treat.  She tells me some things have too much sugar and I shouldn’t eat them.  I can’t argue sometimes.  Favorite veggies are carrots, peas, occasional broccoli, and sweet potatoes.  Says she likes cauliflower but then doesn’t really eat much.

She’s become a really great little helper lately.  She actually helps me put away laundry, make beds, unload the dishwasher, and she’s gotten really good at folding dish towels (bonus is that she’ll put them away after she folds them!). 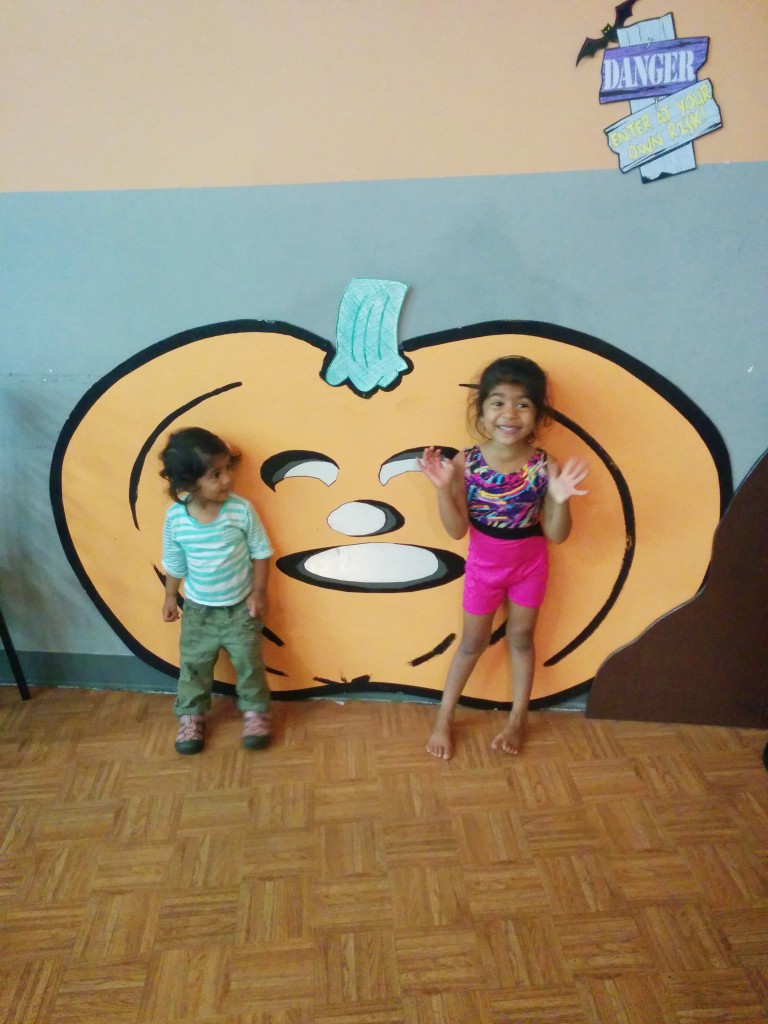 She can dress and undress herself, washes her own hands/face, and brushes her own teeth but I still do her hair, give her a bath (though she’s close to being able to do most of it herself, I think), wipe her bottom after she goes number two.  She still says “I yuv you” instead of I love you.  And Yuca instead of Luca.  She thought Cheryl’s name was Cherub.  And she often ends sentences with “or sumsing like that.”  She’s been saying “OH. MY. GOSH.” a lot as well as “That’s crazy!” and “Are you SERIOUS?”  She may have picked up a  few of those phrases from me.  Lately her dad’s been playing the Wicked soundtrack and she like Defying Gravity.  He told her that the person who sings that song is the same person who sings Let It Go from Frozen.  So now she keeps referring to Elphaba as Elsaba.

Our biggest challenge with her right now is her choosing to not listen to us.  We know she’s ignoring us sometimes and it can be infuriating. Also, she’s no longer napping most days so by the end of the day, she can get pretty cranky and thought of taking a bath is too much for her to handle.  She seems to do well when we give her choices, so I use that strategy often.  Oh, and I wish she’d eat more vegetables (says every mother everywhere).

She’s getting so big.  A couple weeks ago, she woke up from her nap and was a little weepy so I picked her up and held her and she fell back asleep.  Instead of putting her down, I just held her for long while.  It occurred to me that it had been ages since she had slept in my arms like that.  Ironically, just three short years ago, I was beside myself trying to get her out of my arms for sleep and here I was, soaking in her deliciousness and filling my tank.  The other day I looked back at her in the car and something about her expression reminded me of when she was a baby.  I was so happy to see that face again but it made me a little sad, too.  Made me cry.  She still moves me with her kind heart and the way she just skips and jumps and sings and smiles for no reason.  She’s a great kid.  Please, god, or whoever or whatever oversees this stuff…PLEASE don’t let me mess her up.  There’s no doubt that she’s something extraordinary. 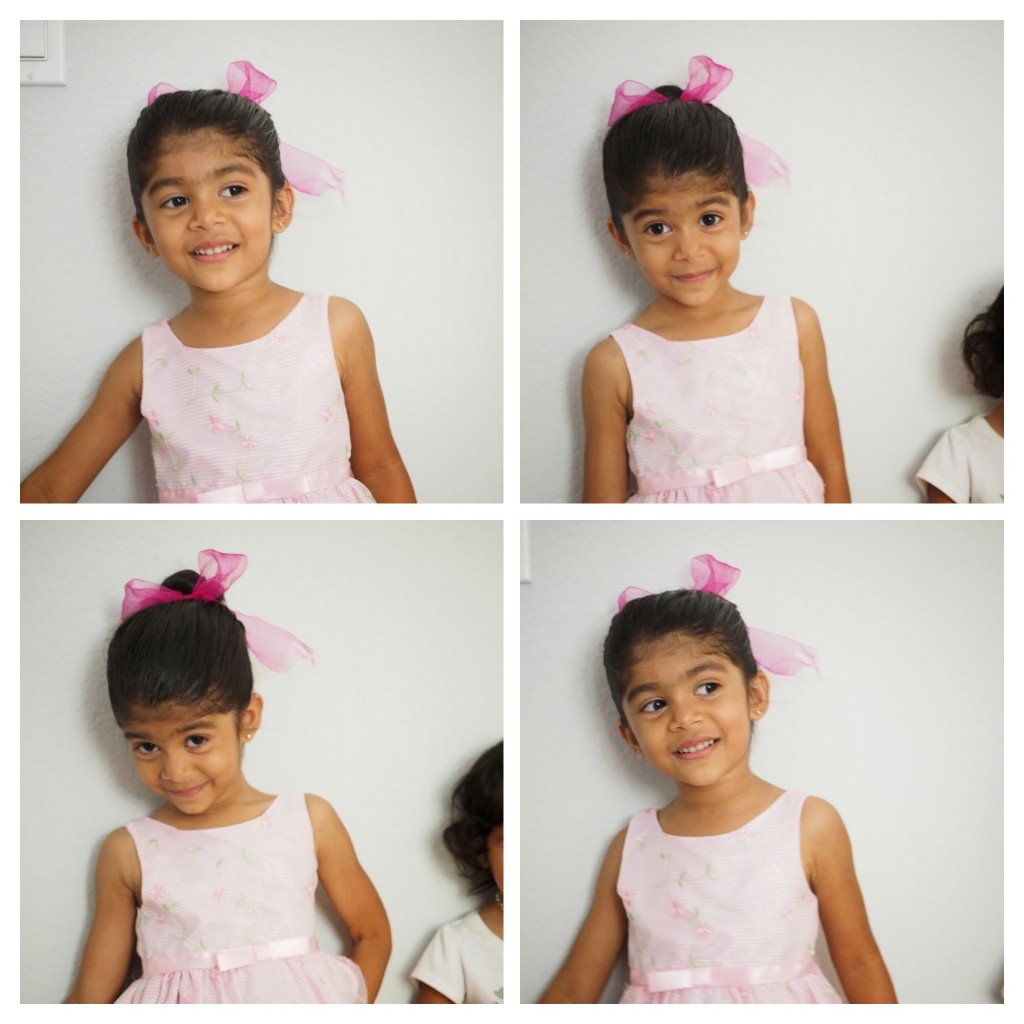