So last week my MIL called and asked if I wanted any lemons. I said “Sure. Maybe just a few – not too many.” She replied “so two or three?” “Yep, mom, that’s perfect. Two or three.” Then later that day, I met my neighbor for the first time and he said “Do you use lemons for cooking or anything? We have this tree and don’t know what to do with all these lemons. Here, have some.” So before I had the chance to say no, he handed me three lemons. I took them. When my in-laws came, Mom handed me a bag and when I looked inside, there weren’t 2-3 lemons. There were a dozen lemons. Maybe she intended some of those lemons to go to my mom’s and brother’s houses. I’m not sure because she didn’t say. She is super generous so maybe she didn’t feel comfortable giving us “only” two or three. I don’t know but I found myself with fifteen lemons and no real need for any of them. By the way, I also had bought one of those lemon shaped squeezy things full of lemon juice. I wasn’t amused when I saw that there were more ingredients in it than lemons. 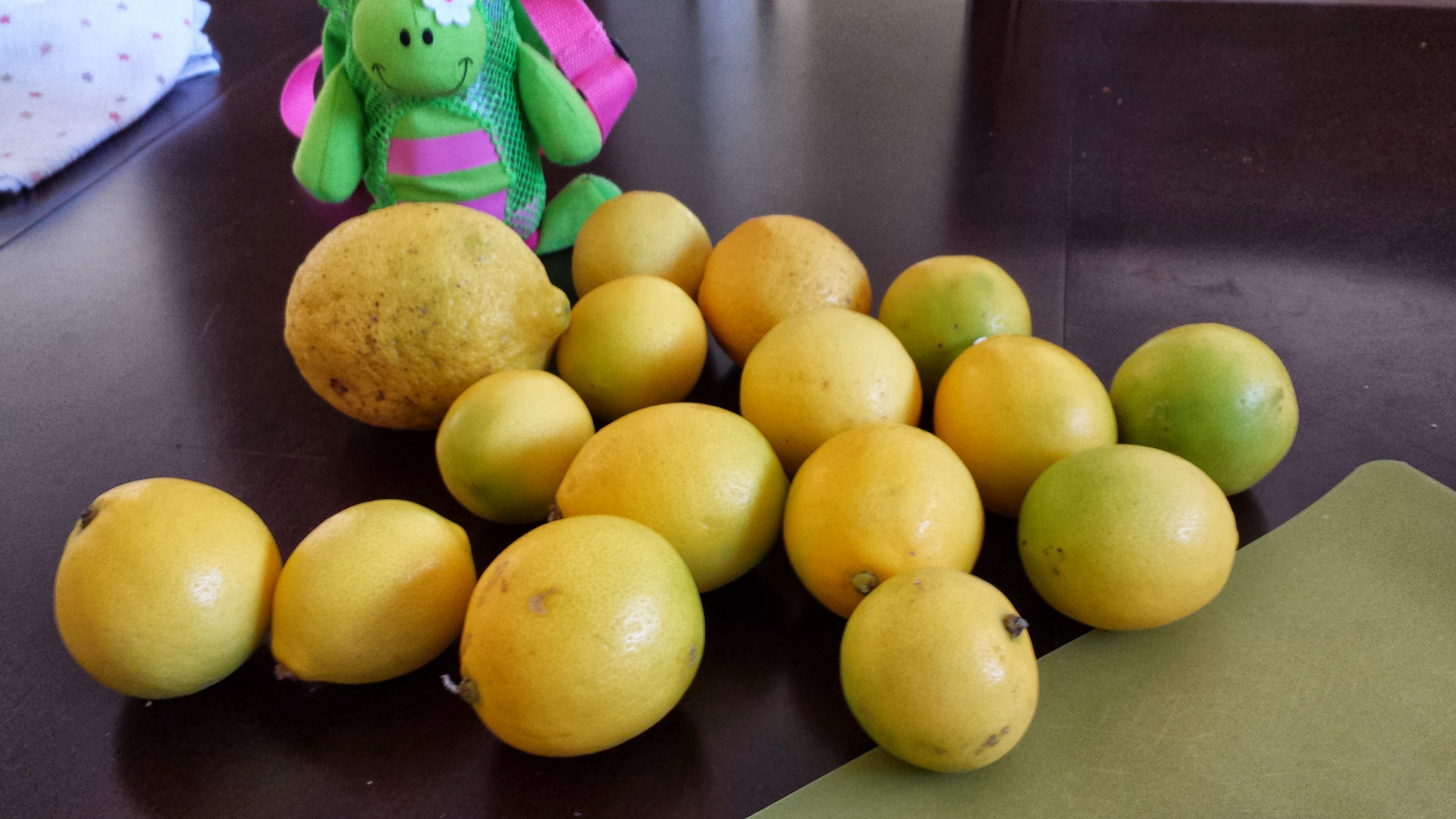 Oh the irony.  You know what’s worse?  I don’t have a citrus juicer.  I guess I could have squeezed them all by hand but I didn’t trust myself to have that much patience and I could see myself getting frustrated with seeds and all that.  So I went to look for juicers.  If I wanted an electric one, it would be $30!  Oy.  I saw an extension that I could put on my stand mixer.  What a great idea!  Until I realized that it was also $30 and then I’d have to drag out the heavy mixer and also wash the parts.  I went to Kohls and was shocked (SHOCKED!) to see that I could buy one of those squeezy things that look like this: 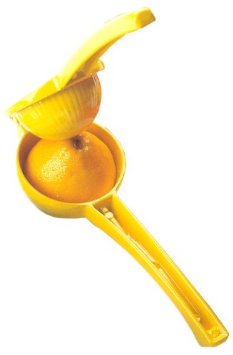 But it would also cost $30.  And I’ll bet I wouldn’t be good at squeezing with that thing.  So at this point, it seemed silly to me to spend $30 on yet another utensil (I have a lot of kitchen utensils.  A LOT.) for some lemons that I didn’t really have a use for yet.  I like free stuff but really, I couldn’t justify spending that much to make use of 15 or so free lemons.  I gave it one last try at our local HomeGoods store and luckily spotted at citrus juicer for $4.99.  Yay!

My lovely assistant and I have juiced about half the lemons so far – it’s really easy and I’m surprised by how much juice a little bitty lemon can yield.  Maybe I’m surprised because usually I juice them by squeezing them by hand and they don’t put out that much. 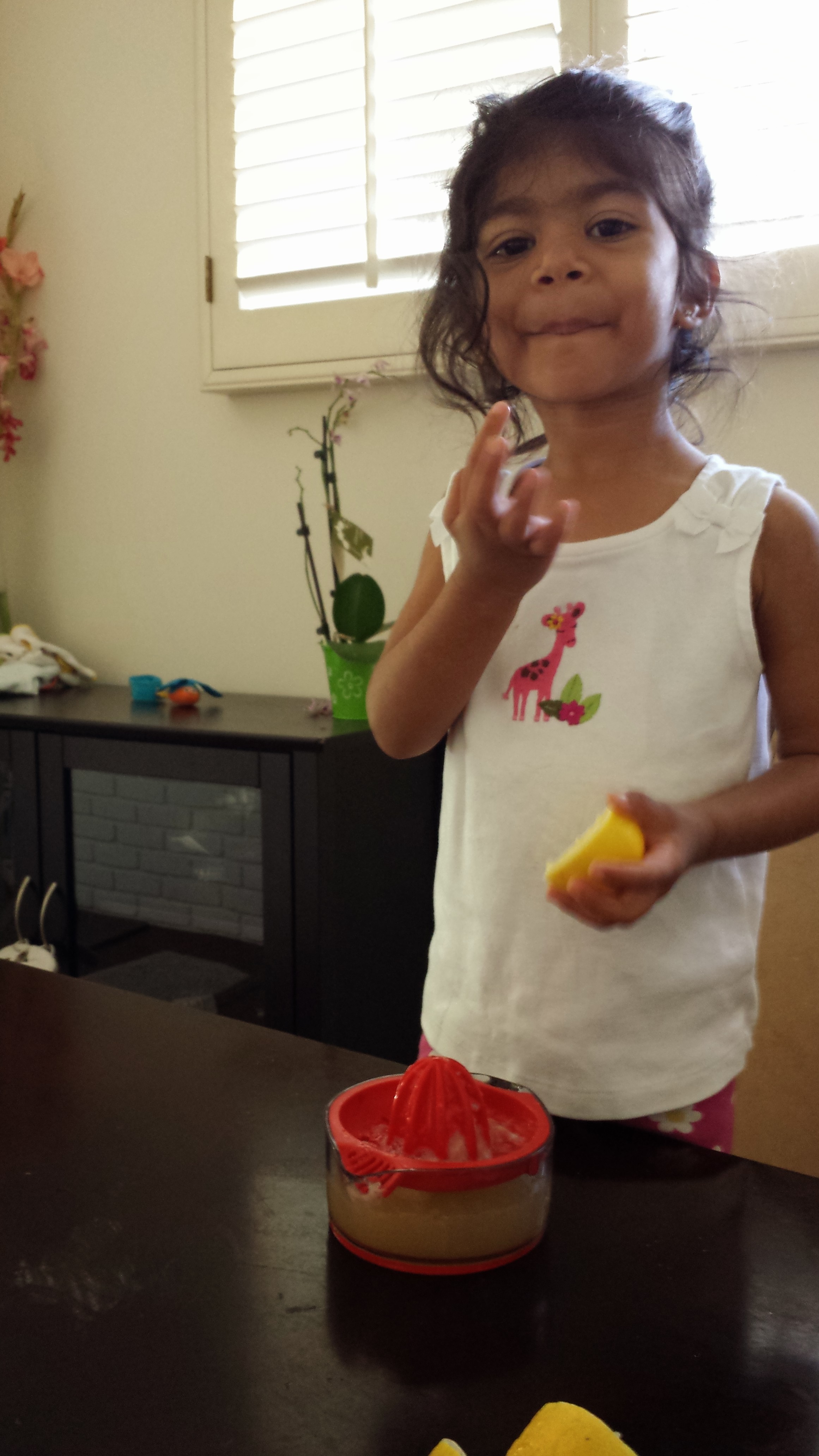 So about half the lemons yielded a whole ice tray full of lemon juice.  I believe each ice cube is two tablespoons and there are 14 cubes, so almost two cups of lemons so far.  And since they’re frozen, I can just use a cube at a time as I need them!  Hooray!  Usually I buy a bottle of lemon juice for around $3 and it inevitably goes bad so it’s a waste and it has added crap and it produces garbage.  This route does none of that!  I might be a little biased, but I think the ones from my in-laws’ house are much prettier and lovelier.  They actually juiced better too.  Maybe because of the type of lemon.  Maybe because I know they were grown with love.

This fall’s harvest has been good.  My in-laws also brought us about 20+ figs and some persimmons.  The figs are the expensive mission variety and though I don’t care for them, my husband and both daughters enjoyed them.  I’m always shocked at how expensive they are, even in season.  I think I saw a basket of maybe 5 figs at the farmers market that was $6!  Crazy.  And they also brought us delicious persimmons.  I’ve been putting them in Miss K’s lunchbox and I think I’m going to steam some for Super S to try.  I had made baby food out of some from their yard for Miss K. when she was a wee one two years ago.  My parents gave us two huge pomegranates from their yard too.  I’m going to bust them open this week.  Those are full of antioxidants and Miss K. loves them.

I’m so embarrassed to admit this but it’s still a thrill to get food from our homes.  I’m so used to only eating foods that were bought at the store that it’s exciting (and a bit strange) to just go pick them from the yard and eat them.  I love this.  I really really REALLY need to try hard to grow some veggies next spring.  It would be so nice!  Maybe not cost effective, but wonderfully fresh and less trash produced!