It’s week one of food waste friday posts.  Not a great week but not as bad as I was fearing.  I thought I had an entire unopened container of organic baby spinach going bad in the refrigerator but it turns out that it looks like it’s still ok.  I don’t think we’re going to be able to get through the whole thing but I’m glad it’s not completely going to waste.  This would have been triple crummy because not only is spinach an incredibly nutritious food, but it’s not cheap and I would have been producing trash (well, sort of – I would have recycled the container) unnecessarily.  Anyway, here’s my picture for the week: 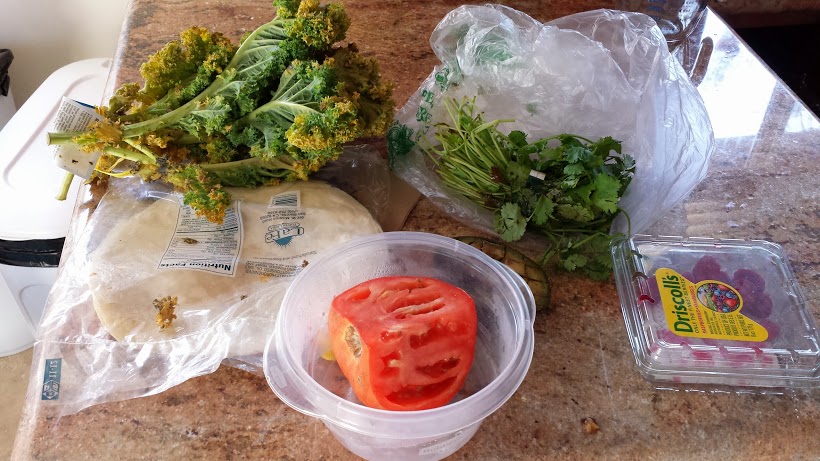 A half bunch of kale, half a bunch of cilantro, a few raspberries that were forgotten in the back of the fridge, four tortillas that were dried out and 3/4 of a tomato.  Only about 20% of the tortillas were crisp (the ones that were near the open part of the bag) so I was planning on cutting off the crispy part and using the soft parts for quesadillas but then I noticed some mold so I threw them out.  Poor kale.  So nutritious and delicious yet wasted.

What’s not perfect about FWF is that I toss things throughout the week too, sometimes.  For example, I threw out some mushrooms that were looking sad and wrinkly but I did that on Tuesday so it doesn’t show here.  Oh well.  As long as I don’t start throwing things out early to avoid the shame, we’re good.  Maybe I’ll try and take a picture of them midweek.

Sigh.  So week one of my public humiliation is done.