That’s right.  Our little squishy is 4 weeks old already.  Where does the time fly?  Things here have been going remarkably well.  She’s been eating, peeing, pooping and sleeping well.  Well, she’s been mostly sleeping well.  We had some trouble with a shallow latch at first that was resulting in very very VERY painfully sore nipples but I went to see a lactation consultant and she helped me learn how to help Super S get a deeper latch and that cut down the pain considerably.

I’ve been lucky with my milk supply – if anything, it’s a little heavy rather than light.  So no need for supplementing with formula so far.  Keeping my fingers crossed that it doesn’t change.  Super S was born 7 lbs 3 oz and her discharge weight was 6 lbs 11 oz so she lost about 7% of her birthweight, which is within normal range.  When we went in for her 4 day checkup, I think she lost one more ounce and was 6 lbs 10 oz.  By the time we returned for her two week checkup, she was 7 lbs 11 oz and now she’s around 8 lbs 11 oz.  And her cheeks, tummy and thighs are filling out.  For the first two weeks, I was feeding her every 2 hours during the day and waking her up every 2.5 hours at night to eat as well.  This was mostly to help work through some jaundice; luckily it was light enough to not need any kind of treatment – she ate enough to poop it all out.  After she had passed the 2 week mark, I stopped waking her up at night and waited for her to wake me.  She’s like an alarm clock, though…pretty consistently up every 3 hours.  At night she sleeps in a bassinet next to our bed.  During the day she’s hit and miss when it comes to sleep.  Sometimes she’ll stay up for a couple hours a couple times a day.  Other days, she’s just sleepy.  Like today.  During the day, she sleeps everywhere.  Sometimes in her crib, sometimes on the couch, sometimes in her carrier.

She’s also smiling at us.  It’s ridiculously lovely.  I think she’s getting cuter and cuter everyday.  Since we came home, we’ve been using gDiapers’ newborn diapers, and washcloths and water for wipes.  I started using small gPants the last few days so that we could take start using cloth whereas we were more successfully leak-free with the disposable/flushable/biodegradable inserts inside the newborn size.  She’s really funny and seems to prefer pooping in a fresh diaper.  Sometimes I don’t even make it out of the room and she poops.  Times like these I really like using cloth diapers.

Right now, she has some baby acne and she’s still peeling.  Her stump fell off a little before two weeks so we started immersing her in water for her baths twice a week.  The last time I bathed her, I also used Babyganics soap and Little Sprouts shampoo, followed by Aveeno lotion.  I’m wondering if maybe the lotion didn’t sit well with her skin and that’s why she broke out.  Dunno.

Miss K. has been great with her for the most part.  She always smiles at her and says “Sia’s eating!” when she’s eating and wants to touch and hug and kiss her.  She looks to see if she’s awake or asleep and doesn’t seem to mind that her little sister has come to our house.  She does seem to notice more when her dad is holding Super S and sometimes asks to be held too.  We are very thankful that she hasn’t reacted violently nor has she demanded that we put down her sister to attend to her.  No significant regressions with potty training have popped up yet either.  Ya, she’s had a few accidents and needs us to remind her to go, but all in all she’s doing well.  When I was pregnant, Miss K. went through a phase of not wanting me around.  We seem to have a minor, occasional reprise of that, unfortunately.

I’m really happy with the way the first four weeks have gone.  I feel like my recovery was pretty quick – I only took advil once after coming home, I’ve had energy and am not so stressed.  I’ve pretty much lost my baby weight and feel good.  And it wouldn’t have been possible if my husband hadn’t been so wonderful with our older daughter.  I think him being home has left Miss K. feeling secure.  Granted, she’s going to be heart broken when he goes back to work but we’ll work though it.  Here’s my little dumplin’. 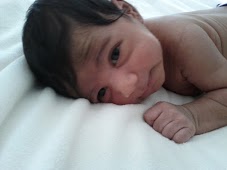