Miss K. has been going through a lot lately – we’ve traveled, she’s getting more teeth, potty training, sleeping in her own bed, developing verbal skills, starting to kind of understand that there’s a baby coming…it’s a lot for a little tyke to handle.  Consequently, her dad and I have been going through a lot too.  Here are a few of the antics that she blessed us with today…I’m writing them now so I can laugh at them later.  They weren’t quite so funny today but I know it’ll crack me up soon enough because she won’t be 22 months old forever.  For anyone who reads this and doesn’t have kids, here’s what you have to look forward to:

Miss K. has a bit of a cold.  Luckily it’s mostly sneezes, a runny nose, and an occasional cough.  It’s worst in the morning hours.  She sneezed and so much snot came out that I had to change her shirt.  This wasn’t that much fun because she fought me when I was putting on the shirt and then followed up by fighting me when I took it off.

She then proceeded to insist on eating her breakfast naked.  Luckily for us all, we were eating oatmeal, so it was extra messy and naturally the thought of me feeding her was offensive so ya.  It was lovely.  She tracked some into the hallway and pointed it out to me as if to say “You missed a spot, bitch.”

Then as her father attempted to dress for work, she sneezed into his pants and kept trying to hug his legs with her sad snotty face.  I felt bad for her – she just wanted a little love.  Either that or she was attempting to earn him the name of Snot Crotch at work.  One way to earn a title, I guess.

When I picked her up from school, she demanded that I provide crackers in the back seat.  I had no crackers and gave her string cheese instead.  This cheese ended up on the floor of the car followed by an “Uh-oh” from Miss K.  When I asked her who threw the cheese, we had the following conversation: 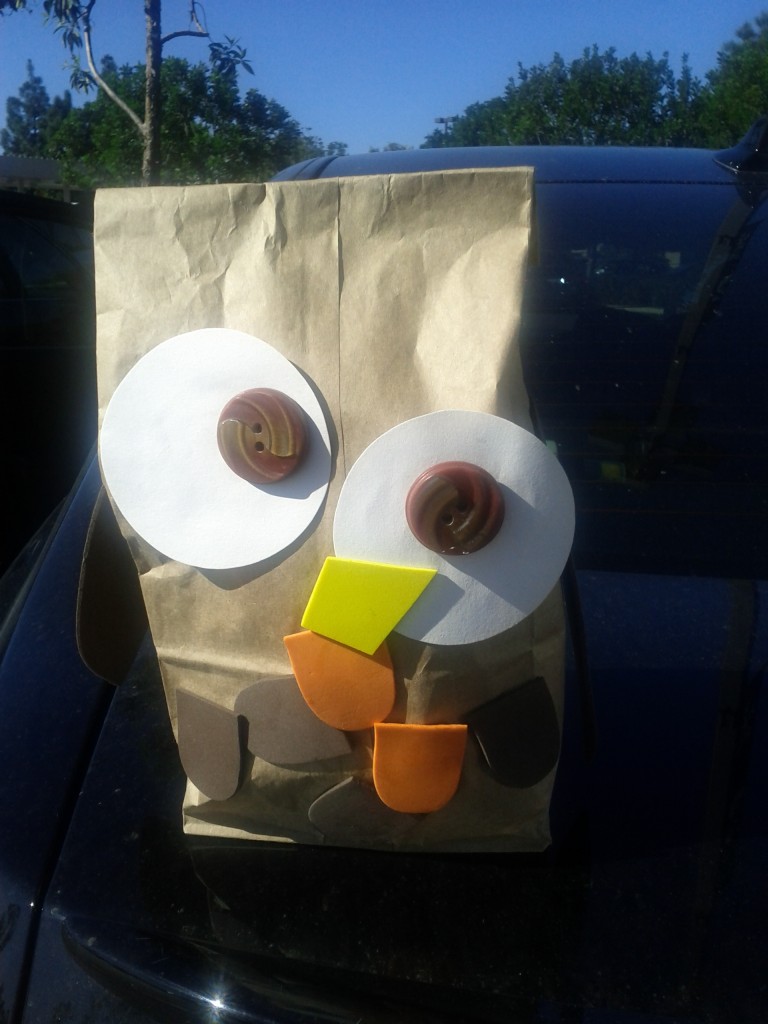 Poor, googly eyed, f’ed up owl (which I ADORE, by the way. No joke.  I really really love it.  Especially because Miss K. hails from a bloodline of awesome craft owl makers).  She made this owl at school and was trying to frame him.  I am kinda proud of her because she put together the fact that if she was going to pin the crime on someone, they would need to be in the car.  And since I already ruled myself out, that only left her and the owl wasn’t talking.  Way to go, evil genius.

At home after fighting me to eat lunch, I wanted to take her for a walk in the hopes that she might fall asleep and begin her nap.  While climbing over me (I was innocently putting on my shoes), she began incessantly chanting “stroller, stroller, stroller,” which I would be putting her in momentarily were it not for the fact that she was climbing all over me, sticking her fingers in my nose, mouth, and down my shirt.  She proceeded to pull out the $16 POS stroller in addition to the sidewalk chalk.  I was not interested in either and just wanted to untie my shoes so I could put them on.  Despite the stroller chant, the expensive jogging stroller was unacceptable to her because she fought me while buckling her in.  She kept pointing to the POS stroller and saying “Different.  Different.”  Tough luck.  We’re taking the jogging stroller.

Then she slept like a champ.  She was adorable sleeping in her bed in just a t-shirt and a diaper.  I really love her.  I actually had to wake her up because if she slept too much or too late, she’d have a hard time falling asleep at night.  I said “Wake up,” to which she flatly replied “No.”  No anger, no defiance, just no.  As if her mother’s requests had no bearing or weight.  So I proceeded to turn into MY mother and turned on the light and started cleaning her room.  That seemed to wake her up but instead of being annoyed like I would have been, she actually was happy to see me and smiled at me.  We had some fun and some giggles and she said “Poo poo?” so we went to the potty and lo and behold – she took care of her business in the potty.  Yay!

Her dad cut the plastic bag around a rug that we had bought and put down the scissors for a brief moment.  She snatched them up.  Uh no.  You can’t do that.  Then later she asked for the scissors again:

“Why do you need scissors?”

She fought me when I tried to take off her clothes for the bath (as you recall, she also fought me when I put the clothes on this morning).  She didn’t want to get in the tub until I came up with some silly song.  During her bath, she decided to throw water out of the tub and onto me very suddenly.  That’s always fun when you’re tired.  Then she didn’t want to get out of the tub.

After a few books, I turned out the lights and she was trying to climb out of the bed.  I enticed her with a long song.  That seemed to work for a while and then she said “Poo poo?  Potty?”  Sometimes she gets the words mixed up.  Alright.  Let’s go.  She peed in the potty.  Yay.  Proud of you, dumpling!  We return to the room and she says “poo poo?”  Really?  Really?  After you’re nice and clean from your bath?  And we’ve gotten you dressed again?  So we went back to the bathroom and she’s happy to hang out there.  She insists that we take off her pajamas completely.  So now it’s way past her bedtime and she’s sitting on the potty naked, making faces at me.  Not pooping, either.  But she’s just so damn cute.  I can’t be too mad.  So we put her diaper back on.  And her pajamas.  And she fusses because she doesn’t want to go to sleep.  But after a while, she does.  And I’m thankful.

To her credit, she also did some pretty amazing things today…she put together all kinds of phrases – I’m bouncing!  I cut it! Neeni’s potty! And she was so happy to see her dad when he came home from work.  And she mostly cooperated when it was time to eat dinner.  And she hugged me extra and said “Wuv oo” to me.  And she said “wuv oo” to her baby sister.  And she didn’t wet her pants at all today – no accidents.  She does some crazy things but she is over the top amazing.  So much so that I didn’t lose it today.  Instead I’m just tired (but happy).  Here’s that owl again.  I really really love it.