A couple weeks ago, we decided it was time to try to start potty training Miss K.  Yowza!  I know that a lot of people think it’s REALLY early – she’s now 21 months old – but here are the things that led me to believe that she was ready:

And ya, from my perspective, there’s a lot of benefit in getting her potty trained – she’s had 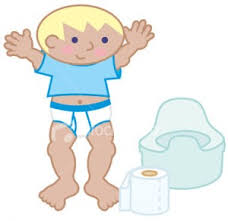 a lot of diaper rashes and keeping her out of a wet diaper is important.  Also, we’re having a baby in February and it would be a heckuva lot easier to only have one in diapers.  She’s going to school and while they are great about changing her frequently (once she came back with three wet diapers in a three hour period!), there’s peace of mind knowing that she’d be free of diapers there.

Anyway, I found a book to serve as a guide – I used Jamie Glowacki’s Oh Crap! Potty Training.  It was a quick/easy read and so far it’s been going well for us.  According to the author, the sweet spot for potty training is between 20-30 months and Miss K. fits right in there.  I think it’s been a benefit to us that she has just the right amount of awareness – she’s not so developed that she is trying to outsmart me and isn’t afraid of things like the flushing of a toilet.

On day one, we had several pees on the floor, but that’s expected.  You’re supposed to start getting the little one comfortable with using the potty.  And you want to start making the association that pee and poop go in the potty, not in your pants.  By the end of the day, she was definitely comfortable with the potty and was proud when she made it there in time.  She didn’t go #2 (I guess this is something that happens frequently) but on day 2, she went twice in the potty!  As gross as it is to have to clean a dirty potty, I was super proud of her.  She had a couple accidents but was definitely showing that she was “getting it.”  On day three, she went through FIVE pairs of pants within like seven hours.  Seriously.  It was a trying day.  But we pushed through and the next day she only had one accident and that was mostly my fault for being on the phone and not watching her signs.  Day five, we sent her back to school.  She didn’t have any accidents there!  I was super excited.  But unfortunately she did have one at home.  But still, I found it to be encouraging.  Day six, she had two accidents at school and none at home.  Day seven – ZERO accidents!!!!!  I was super proud of her.  She was beginning to tell me when she needed to go and was very cooperative to go to the potty.  She WANTED to make it there in time.  She was clearly uncomfortable when an accident happened.

It’s not an easy thing to potty train a toddler but for us, it’s going well.  The first few days were EXHAUSTING but the progress is motivating.  I think a few things that helped were:

So that was our first week.  I’m happy with the progression so far.  In week 2, the goal will be to reinforce what she’s learned and hopefully get her comfortable with using the big toilet.  She uses the toilet at school but I want to make sure she’s not overly attached to her little potty.  Let’s hope we continue to progress without too many set backs.