Was listening to NPR the other day and they mentioned that ideally, 40% of grocery 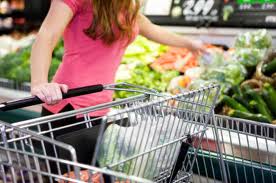 expenditures should be spent on produce.  That seems like a lot.  But maybe I got that wrong…I tried googling it but no luck.  At any rate, it got me wondering – how much do we spend on fruits and vegetables?  So for the next month or so, I’m going to track our grocery bills to see what we’re spending.  I think it’ll be a good exercise because right now I really don’t know how much we spend on groceries or how those dollars are allocated.  Will keep ya posted!

In other news, Los Angeles just passed a law this week that says one-time use plastic bags are now banned at grocery stores.  Large grocers have six months to phase out the bags and smaller grocers get up to a year.  How awesome is that?!?  They will still be able to offer paper bags for ten cents each.  While it might seem ludicrous to some, I do think this will reinforce some good behaviors.  My guess is you’ll see a lot of people walking out to their cars with their groceries in their cart and piling them into the trunk piece by piece sans bags for a month or so.  Then it will become habit.

It also got me wondering about how much better for the environment is paper than plastic?  On the one hand, paper is much easier to recycle and I believe it biodegrades easier too.  On the other, paper weighs more and requires a tree to be cut down.  So if you fill a truck with plastic bags and fill another truck of the same size with paper bags, you’d fill considerably less paper bags than plastic.  So that means that we’re paying (both financially and environmentally) more to transport those paper bags than plastic.  I guess the payoff comes when you think about how easily the bags become an environmental nuisance.  They blow away easily and get caught in trees, they blow into the ocean and get wildlife…I guess also paper bags can be reused for a number of things whereas the plastic bags typically are just tossed.  My mom reuses them as garbage can liners in her smaller cans.  I should probably do that too.  Anyway, kudos to Los Angeles for being the biggest city in the nation to adopt this ban!