I’m the first to claim my love for gDiapers.  I love ’em.  I do.  BUT lately things have been a little crazy with these diapers.  Mostly, it’s the consumers again and in particular it’s the resale of these diapers.  It’s kind of crazy.  Let me give you probably the most extreme case.  In 2009 (I think), gDiapers released a gStyle called the gCycle.  It was cute: 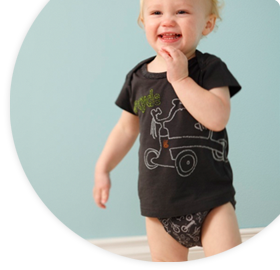 It has bikes all over it.  Well, from what I’ve read, gDiapers had a hard time selling this print back then and actually put this one on sale to move some inventory.  Fast forward three short years later and gmoms are getting crazy trying to get this diaper set.  If their prices are like they are now, the price would have been somewhere around $35; $15 for the shirt and $20 for the diaper.  Here’s a list of completed auctions on ebay in May for the same set or its pieces:

Insane-o.  There was a shirt that was bid up to $132.50 but didn’t meet the reserve.  What on earth was this seller expecting to get???  Let me tell you why I think this is crazy…first, we’re talking about diapers here.  Diapers that babies POOP IN.  And buying these used means SOMEONE ELSE’S BABY POOPED IN THEM.  Why on earth would you pay that much for a diaper that someone else pooped in?

The other thing that I don’t get is that in the 15 days in May, there were ten listings that closed successfully.  So if that’s the case, are these really *that* rare?  Granted, a few months ago, it wasn’t like this.  I think the super duper high prices are encouraging people to sell these where they wouldn’t have otherwise.  If these are becoming more available, Econ 101 says that prices should come down.  But I don’t think they will.  Why won’t this bubble burst just like all the others (including tulips)?  Warning:  I’m going to be inflammatory with these remarks – it’s a rarity for me but I just can’t help myself.  Why?  Because bird brained moms who sadly feel their self worth heightened by stupid things like t-shirts and diapers will pay for them.  This will only go away when/if there’s a better product.

Now I can’t be a hypocrite.  I, too, get unreasonably excited by these diapers.  And I DID pine for a few when I first got started.  However, I would never EVER pay that much for a DIAPER.  I understand that there is a perceived value here.  I’m just struggling to understand what that value is.  Is it completing a collection of all g’s?  Maybe I can understand that.  Is it the thrill of the hunt?  These type of moms MUST feel buyers remorse.  OR is it more that the value is knowing that you have something that others desire?  Honestly, I think that’s what it is.  I know I shouldn’t care because, seriously, everyone has the right to spend their money how they see fit.  If someone really loves this print and wants it at all costs, I really shouldn’t judge.  And yet…

I guess based on what I see on the gdiapers boards, I get the feeling that some of these moms who hoard diapers and pay crazy amounts really can’t afford to be doing so.  I had one mom (who I know has a ridiculously large collection) contact me about a diaper I was selling and she said “but I won’t be able to pay you until Friday after I get paid.”  Now if you have to wait to get paid to pay for this, my guess is that you shouldn’t be making the diaper your priority.  It slays me when they so confidently say that they’ll be able to sell their $150 diapers for a profit.  It’s crazy that they *expect* to make money on gdiapers.  Let’s stop and think about that for a moment.  Have you EVER bought a piece of clothing with the hope that you’ll make money on it?  Have you ever even bought a piece of clothing with the thought that you might be able to recoup some of your costs?  Cloth diapers are weird that way.  Again, I shouldn’t judge but here I am.

So that’s the emotional WTF side of the argument.  On the other side, why not?  If there is so much demand for these diapers that people are willing to pay this much, then let consumerism and capitalism do their things.  What I find funny is that gMums accuse the company of withholding inventory on purpose.  That’s so ludicrous.  If they are confident that they can sell inventory, you bet they’re going to manufacture plenty to meet that demand.  I’m confident that it’s not them creating a mania.  It’s bird brains like me who can’t stop singing their praise.  And hell, they make a cute product.  Sigh.

Speaking of which, look at the new novelty prints they put out this week: 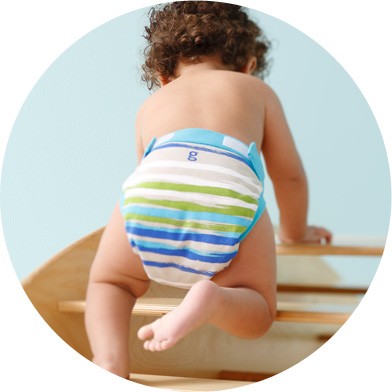 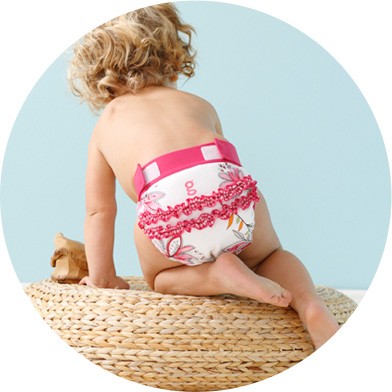 I actually didn’t care for the wave and thought the ruffle was a little busy when I saw them back in December but I’m picking up the ruffle for sure because I love seeing little ruffles on Miss K’s little bum.