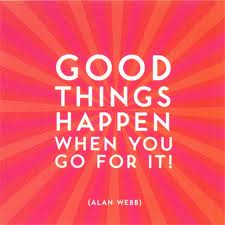 Ya, I never thought I’d say it but running IS fun.  I’m training for a half marathon and I’ve been trying to be more consistent with my training than I’ve been in the past.  When I did half marathons in the past, I basically ran one run per week – the long run.  This time around, I’ve been trying to do a run or two during the week in addition to the long run.  In an ideal week, I’d do one run at a decent pace, one speedwork session (where I push myself to go faster than my normal pace but for shorter distances), and one easy going, slow paced long run.  Each week I add more time to the runs, particularly the weekend long run.  It’s nowhere near as hard as it used to be.  It ain’t easy but it’s not destroying me either. 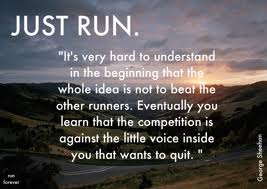 way.  In particular, I’m really liking the long runs.  Although now that I’m moving into the long distances, it is definitely getting harder.  In the last few weeks I’ve fallen behind.  We had rain two weekends in a row and then I did a long 7 miler (with an additional mile walking) and then didn’t do my run this weekend.  Yikes.  I need to somehow fit in two 8 mile runs between now and Sunday.  Argh.  Gotta do this.

I do like the long runs because it brings on the runner’s high.  I’m out there feeling the wind on my face, smelling the smells of being outside, and your senses become heightened.  The music in my ears seems better – it gets me pumped, makes me happy, and makes me think of happy times.  I’m reminded that it’s nice to get a smile of encouragement from other runners and the look of “you can do it, girl!” from other women on the trail and that it’s nice to smile and wave at strangers.  I usually run on a trail that has a lot of traffic – you see kids on bikes, people walking and talking, runners running fast, bikers biking, and once I even saw someone riding a big ol’ unicycle.  It’s pretty cool actually. 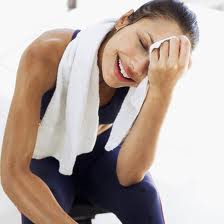 good.  I’m going to try anyway.  When you’re having a good run, you feel strong, you feel proud because you’re able to do something that’s not easy, you feel like you want to keep doing this.  As gross as this sounds, I LOVE seeing the sweat caked to the inside of my hats and visors.  I LOVE it when sweat drips into my eye.  I LOVE it when I go to scratch my ear and I’m grossed out because it’s salty.  Why?  Because it’s proof that I worked hard.  Gross, I know.  I really love it when my heart rate monitor/gps says that I burned over 700 calories.  So fantastic. 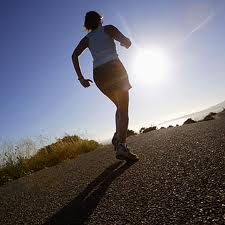 And yet, I’ve been really bad about getting my runs done.  For a while, I was doing good – running a couple times a week at the gym and again on the weekend.  Ugh.  Why is it so damn hard to just get out there and go?  I don’t think there’s an excuse for the shorter weekly runs.  I can do those with baby in her jogging stroller or I can go to the gym after she goes to sleep.  Luckily she enjoys being in her stroller so she’s good for about an hour.  The longer runs are a little trickier.  If I don’t get out the door early enough, I won’t have enough time.  Miss K. has class on Sunday mornings.  Then there are other factors like weather (it’s raining or it’s too hot or whatever).  And this weekend I had a bridal shower I had to prep for.  I don’t know.  It feels like excuses – I just need to do it.  A couple times the odds were against me.  A few weeks ago I needed to do six miles (plus one walking) but I didn’t do it Saturday morning.  And I didn’t do it Sunday morning.  And it was starting to really cool down but I dragged myself out on Sunday afternoon and actually had a fantastic run.  Last weekend I needed to do seven (plus one walking).  Same thing…it was getting late.  It looked like rain.  It sprinkled on the drive to the trail.  There was a cop car where I normally park.  But I dragged myself out there and the cool weather worked to my benefit.  Again, great (but tough) run but I was so happy I did it.  Not like this week where I’m pissed I didn’t run.  Ugh.  The feeling of well being that comes with these runs is indescribable – I just need to get it done.

What do you do to motivate yourself to work out?

1 thought on “Running is Funning!”