Today’s one of those days where I get to use my blog as an outlet for my stream of random thoughts.

I used to buy microwave popcorn.  Then I started hearing about how too much microwave popcorn isn’t good for you.  I know that it has to be obscene amounts but I had this urge to buy kernels and pop them on the stove so I did.  Man, oh man, was it good!

But kind of a PITA because you have to stand there, shaking a pot, for 10 minutes.  So then a friend shared a link that showed how to make microwave popcorn with kernels.  All you have to do is put some kernels in a brown lunch bag, fold the top twice and turn on the microwave.  No chemicals, no burns due to crazy flying kernels, less fat because there’s no oil and super duper easy.  I’ve been doing that lately.  It’s way high on the convenience scale but I have to admit that the stove popped popcorn is better.  The popcorn off the stove is way fluffier or less dense.  Maybe it has something to do with the temperature level.  See, when I make popcorn, I can’t help but share with the little one.  She loves it but I have to give her pieces that don’t have any of the shell on it, otherwise she might choke on it.  When I used to make it on the stove, it was easy to find pieces to break off for her.  Now that I’m microwaving it, I have to hunt for pieces and the pieces that I can find are smaller.  I can only guess that the stove popped corn is exploding more extensively or violently and making bigger pieces.

I also sometimes burn the popcorn in the microwave because I’m still not good at knowing when to take it out.  And that stinks, literally and figuratively.  With the stove popped corn, I don’t think I ever burned it.  On the positive side, though, the microwave popcorn is lighter in calories and fat since I”m not using oil.  I will probably keep making the microwave kind out of sheer laziness (and because I just bought 200 brown paper bags – what!?!  At least I can recycle them!) but when I really want good popcorn, the stove is the way to go.  Either way I’m eating it and want to do this one day: 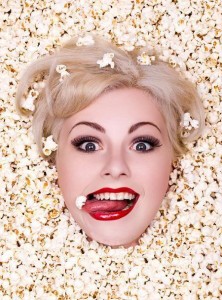 When I was a kid, my Dad has a business in an industrial part of Albuquerque, New Mexico and there were all kinds of companies nearby.  There was a Nabisco plant or distribution center, a slush puppy office/distribution center and there was a place called The Popcorn Factory.  They sold huge (and I do mean huge) bags of popcorn that were probably two feet tall and ten inches in diameter.  My dad and his business partners always kept some in their “executive” breakroom (if you saw it, you’d understand why executive is in quotes) so I always knew I could have that popcorn if we went over there.  Once my brother and I walked over to the factory to…well I don’t know what…buy popcorn?  Probably not…just satisfy some curiosity and we were probably hopeful that they’d give us some popcorn because we were kids.  Anyway, when we walked into their small office store, we saw they had all these INCREDIBLE options – CInnamon Red Hots!  Chocolate!  Cotton Candy!  Kettle Corn!  Butter!  Carmel!  Cheese!  Our dad and his dopey partners were holding out on us – they only bought butter!  So we spent probably half an hour trying to figure out what to get. I recall eating the cinnamon red hots.  Delicious.  My other happy memory of popcorn is that my mom used to pop corn for us on the stove.  Sometimes it would be Jiffy Pop and other times it would be in a pot.  Because my dad likes spicy food, she would put Indian chili powder in it but of course, not on top after it was done popping; she’d put it in the oil that the kernels popped in.  So what would happen?  The pepper would fly all over the house in the air and we’d all start coughing and sneezing.  I guess that’s not the happy part.  The happy part is that she would dump all the popcorn out and all four of us would sit around the table eating it together.  Something hot and tasty with people you love on a rainy day is delightful.  Now that I have a little one, I understand the joy in making something and seeing your tot enjoy it.

I like to top my popcorn with a little butter, some salt and some nutritional yeast.  Soooo good.  I also like it with hot sauce like Frank’s or Tabasco sauce.  Also sooooo good.  I’ve heard people really like m&m’s with their popcorn but I don’t think I’ve ever had that.  What’s your favorite popcorn topper/combo?