I have another item to add to the “moving in a natural direction by swapping out products” list.  I’m letting go of the habit of using dryer sheets in our laundry.  I’ve always used dryer sheets, probably because I grew up in New Mexico where the air is really dry, especially in the winter.  Without dryer sheets, our laundry would hurt because of all the static in the clothes.  They also smell nice and make our clothes feel soft.  But as I’m getting older, I’m realizing this is just another chemical-laden product that I probably don’t need.  Our cloth diapers can’t use them and I never used them on baby’s clothes so I found myself wondering if we even really need them.  I started looking into them and like usual, research helped me seal the deal.

Dryer sheets are typically a thin sheet of polyester intended to be used once and then thrown out (strike one).  Usually the polyester has some sort of surfactant which is made up of a fatty substance of some sort that heats up in the dryer and adheres to your clothes, leaving a layer of fat that feels soft to the touch (ew.  strike two).  The hard part is that different manufacturers use different chemicals and are not required by law to print what they’re using unless they’re hazardous or are active disinfectants.  Well, apparently some of those chemicals can be irritating to inhale or ingest (strike three).  While most people I know don’t eat or snort dryer sheets, they do breathe the air in the laundry room.  There are studies that show that scented laundry products can release carcinogens into the air.  And in general, if I don’t need it, I should do away with it, right?

So I decided to give them a try.  Depending on the size of the dryer ball (and the size of your load of laundry), you need several.  I bought two to begin with because they’re not cheap.  The ones I bought were from ecomom.com and cost $7 each.  At least I had free shipping :).  They look like this: 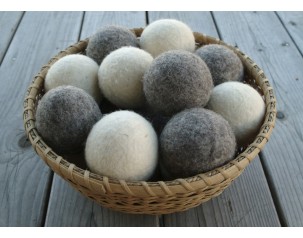 Hers are nice and are about the size of a tennis ball, maybe a little bigger.  I got one in blue and one in gray, although color really doesn’t matter.  I have no idea where the gray one has wandered off to.  It’s nowhere to be found.  According to what I’ve read, you really need 4-8 to see a difference in drying time.  I really want to reduce the amount of drying time for the cloth diapers we wash.  We do 2-3 diaper loads per week and each load is taking about 80 minutes to dry.  That’s not so green when you think of the energy used and emissions released!  Add in the 3-4 loads of our clothes plus rags and dishtowels and you’r looking at sometimes 30 loads of laundry a month!  So off to Michael’s I went to buy wool yarn.  It turns out that wool yarn isn’t cheap, and when you factor in shipping costs when you buy dryer balls online, it’s no surprise that the dryer balls aren’t cheap.

What’s important is that you buy 100% wool.  No wool blends.  Some people use tennis balls as the core but I didn’t want to risk plastic leaching out in the dryer so I decided to stick with 100% wool.  Some people upcycle old wool sweaters with great success.  I don’t have any though so I bought wool yarn.  Maybe I’ll make a trip to goodwill and see what I can find.  I also wonder if you could do the inner core with another, cheaper material and get the same results.  I’m not sure so if you’ve done that, please share your experience in the comments section below.  Anyway, let’s get to the super simple tutorial.

First start a ball by wrapping some yarn around two fingers in one direction and then slipping the yarn off your fingers and going in the other direction.  It should look something like this: 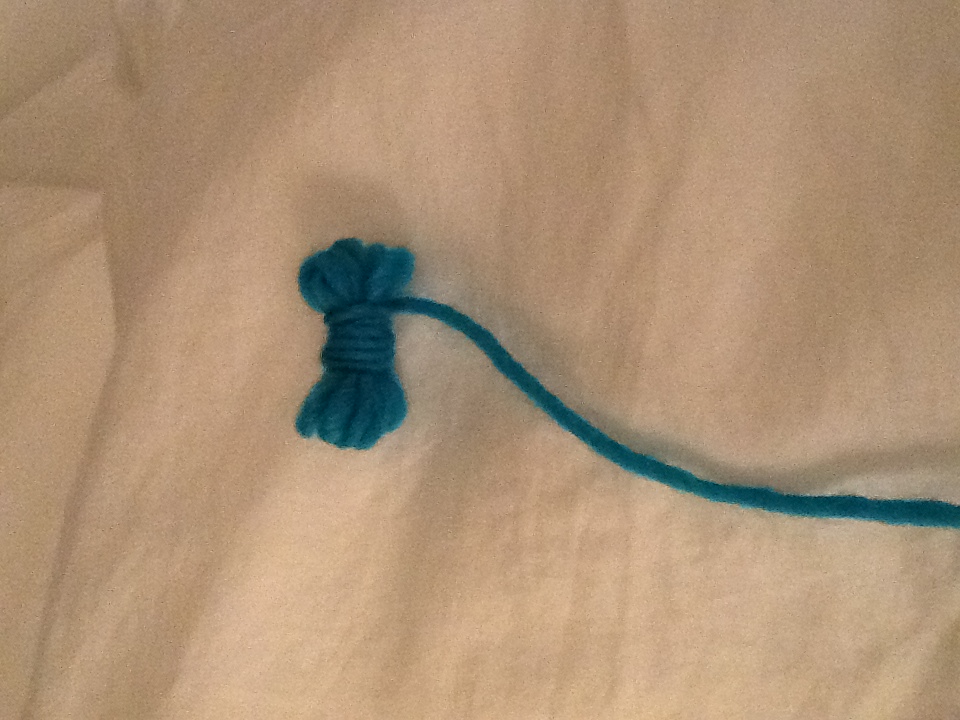 Side note – you can also tie in a sprig of dried lavender inside the ball to scent it but it will eventually wear off.  I didn’t have any so I kept it simple.  I’ve also read that you can add a few drops of essential oils to the balls and that works as a temporary scent too.  I didn’t do either of those things though.  Back to the tutorial…

Start winding in different directions to make a ball, continuing until the ball is about the size of a racketball.  The cut the string and tuck it securely into the ball.  Some people use a crochet needle for this but I just did it with my fingers.  Once it’s about the size of a racketball, you need to felt it.  Felting will help condense the ball and will make is soft and fuzzier, like felt, and prevents the ball from unraveling.  All you have to do is put the wool ball into a leg of pantyhose or a knee high stocking or a sock, tie it with some string (or just tie a knot with the stocking itself if that’s what you’re using), and wash it on hot and dry it a few times.  If you’re making more than one ball, you can use the same sock/stocking, just make sure you tie a knot in between each ball to keep them in their own snug little compartment.  The first time I did this, I used a sock.  It didn’t seem to work *that* great, I think because the sock was rather thick. 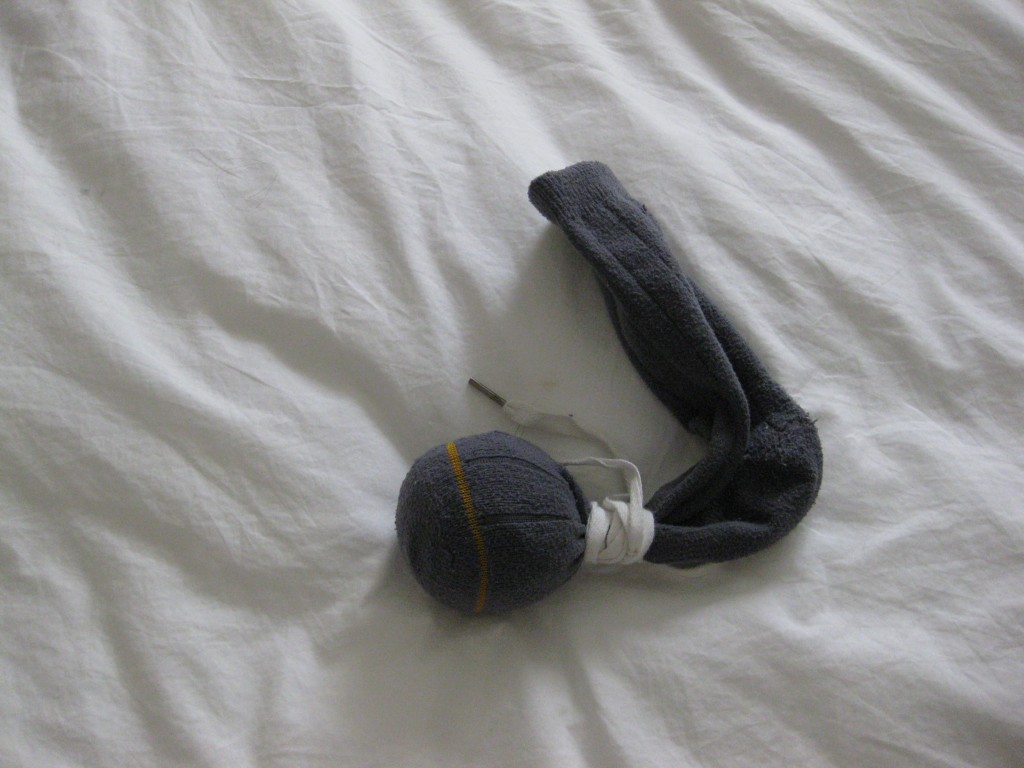 So I tried again on a subsequent set with an old, run-laden knee hi.  Admittedly, they look a little creepy in that pantyhose.  And I will also admit that I got a little carried away with tying them; it took a little longer to untie the string I used than I would have liked.  I just really didn’t want the string to come undone because then the ball would likely unravel! 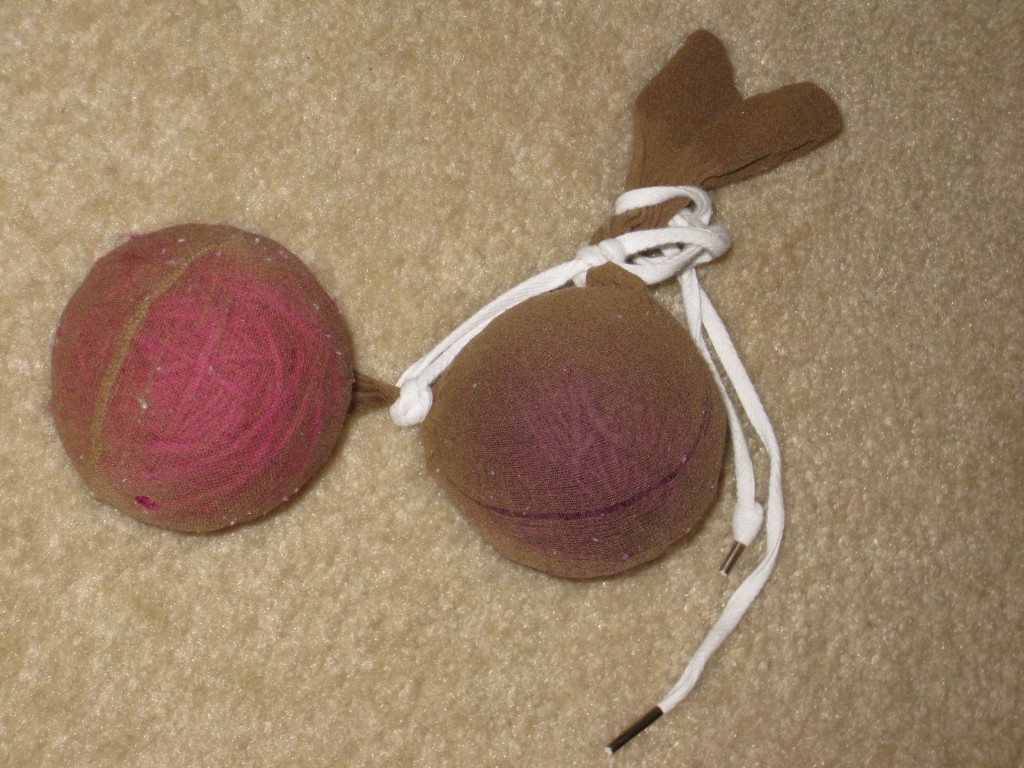 Once the ball is felted, use the rest of your yarn to continue making the ball and repeat the felting process.  I washed this one three times by just throwing it into the regular wash (again on hot). That’s it!  Here are a few balls I’ve made.  I think they’re cute.  Like a happy little band of friends  The blue one has actually been used in a normal wash, which is why it’s fuzzier.  If you find that yours are super linty, I believe you can use a sweater shaver or a lint brush to get some of that lint off. 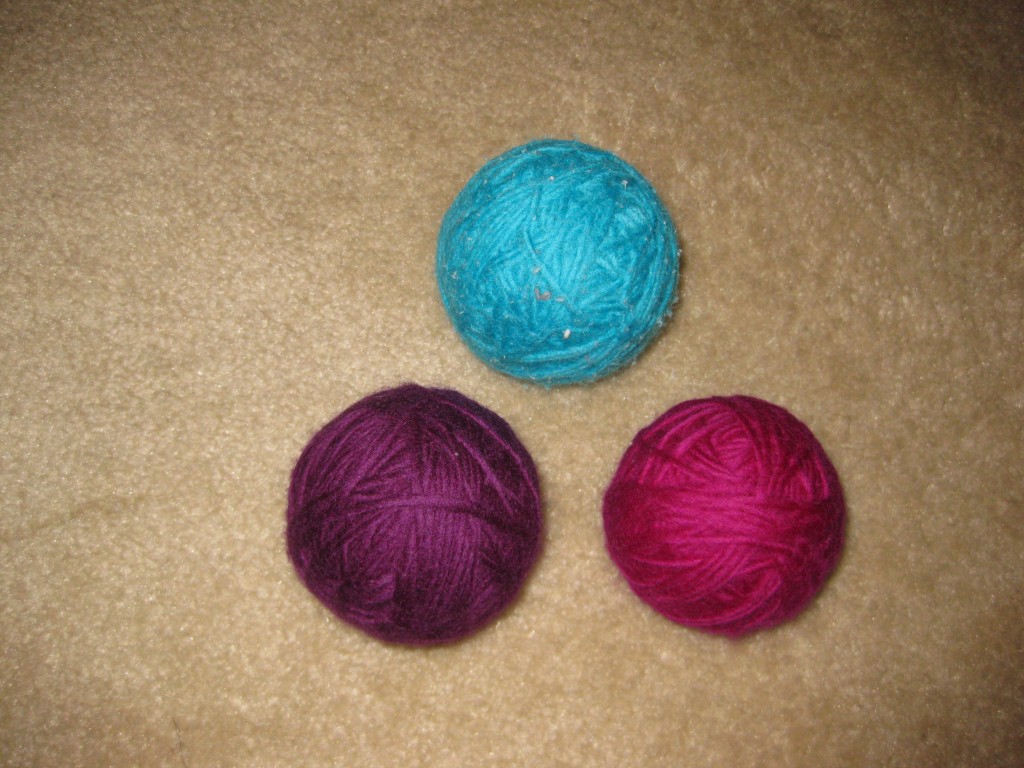 Voila!  Or as my not so bright friends say, Wahla!  You have a wool dryer ball.  Throw it into your dryer the next time you run a load but be prepared – you will be able to hear them bouncing around.  Depending on your dryer, the size of your load of laundry, and the balls, it could get loud.  Ours aren’t so loud that they wake up baby, but it’s something to be aware of.  AND the other annoying part is that they tend to make a break for it when you empty the dryer so make sure you take ’em back to the laundry room!  If they stick around in your bedroom, at least you know they’re safe for your kids and pets to play with.  I actually kinda liked making these…winding the balls was a little therapeutic.  So if you would like to give some of these a try but don’t feel like making them yourself, I can help you.  Just leave me a comment below and we can talk about making that happen.  They’re a great alternative to dryer sheets!