It’s been an exciting few days in our area because I’ve seen SO many alternative fuel vehicles; in just a 1.5 mile stretch, I spotted three LEAFs.  Interestingly, each was a different color.  Then yesterday a LEAF neighbor flashed his lights at us and we waved.  Silly but it’s kind of a little thrill.

On top of that, on another short trip, I saw two different hydrogen powered vehicles.  The first was an F Cell from Mercedes Benz.  How’s that for fancy? 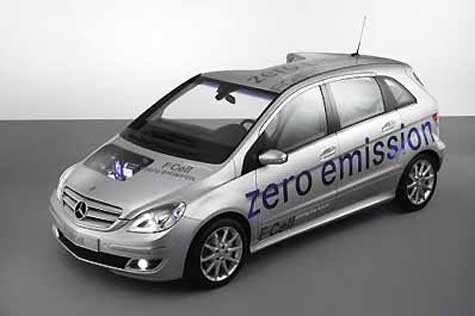 I didn’t even know these puppies existed.  So I did a little reading to learn more.  These vehicles are in limited available in select markets in the US (CA is one of the few areas) and are for lease only.  The car has an estimated range of up to 240 miles and emits only water vapors as its emissions.  These have been sold in the Europe based on both the A Class and the B Class but this US run is only based on the B Class.  They’re positioning the car as “mobility free of range anxiety.”  I love that these cars are on the road and the fact that the range is 250 miles is great.  I still prefer our LEAF due to the convenience of fueling up at home, though.  Seeing it did get me wondering if there were hydrogen fuel stations nearby and if so, how many.  I remember when I was in college (this was in the mid 90’s), we used a campus vehicle that used an alternative fuel (I think it was Hydrogen but I’m not 100% sure; I know it wasn’t diesel!) and I remember the driver had to make sure he filled up at the ONE station that was available along our 40 mile trip.  Hopefully it’s more convenient than that.  I think it’s also great that there’s a luxury branded alternative fuel vehicle.  I think there are people out there who might like driving something like a LEAF but are accustomed to luxury brands and think of it as a step down to drive a Nissan.  This solves that problem.

A few minutes after seeing the F Cell for the first time, I saw a Toyota FCHV.

This vehicle is based on the Highlander body and shares some of the technologies with the Prius.  Like the Prius, the FCHV (which stands for Fuel Cell Hybrid Vehicle) is able to drive on battery only for about 50 miles but it’s kind of a moot point because it has to be at very low speeds.  Might come in handy if you’re stuck on a freeway trying out get out of an evacuation zone?  I just don’t know why they tout this – it’s really not all that useful.  The technology is very similar to the Prius but instead of using gasoline in the Hybrid Synergy Drive, it’s using four hydrogen tanks.Anyway, the car has fantastic range – the four fuel cells can power the vehicle for upwards of 400 miles, making it a contender with traditionally fueled cars.  Awesome.  There are several versions of the FCHV and I believe it’s on version 5.  Toyota is apparently looking into using the technology for buses and trucks too.  With Toyota’s reputation of reliability, I hope this one does well!

It’s really really great to see these options in the market and on the road.  We see a lot of LEAFs driving around these days and the more hydrogen vehicles there are out there, the more fuel stations there will be!  Hooray for clean burning vehicles!