I’ve claimed to be semi-crunchy in this blog before but I haven’t mentioned that before I was a little crunchy, I was a little number-crunchy.  I like charts and graphs and (simple) data analysis.  Over the last several months, I’ve been curious about what some of our crunchier activities have been saving us.  So I did some math.  I was surprised and relieved on a couple of these.  Before we dig in here, there’s some fine print I feel I should disclose.  First, these are all estimates.  There are nuances that make these numbers not 100%, such as I only use credit card expenses; if we paid cash, I have no record.  Also, I don’t have exact numbers for how much we spent on making baby food for our daughter, so I have to estimate.  I do things like take averages rather than look at exact numbers.  All these things make the numbers imperfect but they are directionally correct and I do feel confident enough in them to post about it.  The cool part is that we didn’t make the decision to pursue these avenues based on finances but it sure is a cool perk!  So let’s see some numbers:

We have two cars, an electric vehicle and a traditional gas guzzler.   To get a sense of what we are saving on fuel, I did a quick query in quicken to see what our gas costs have been historically.  With two vehicles, on average per month, we spent the following on gas over the last three years:

In 2011, we’ve spent, on average, $143.33 per month on gas.  So because of our electric vehicle, compared to 2008, we’re saving $300 per month on gas, meaning in a year’s time, we’ll have saved $3600, right!?!?  Wrong.  I wish that were the case but it’s not.  Let’s talk about some of the factors that we have to take into consideration.  First, this model would assume that gas prices are steady.  They’re not.  Second, 2008-2010, I commuted 26 miles each way to work.  In 2011, I commuted 0 miles to work.  So we would have had some considerable savings there, even if we hadn’t bought our Nissan Leaf.  Third, we do pay for fuel for the Leaf, just not in gasoline.  We have electricity bills.  So let’s look at those average monthly expenses for the last three years:

In 2011, our electricity expenses, on average, have been $103.98.  Significantly higher.  Things to factor in here are variable costs of electricity AND in 2011, we had two people home all day long, which I’m assuming adds to the cost of electricity, since I use the microwave, computer, lights, washing machine, etc. so much more.

Because I have an eight month old, I ain’t gots no time to normalize these numbers for fluctuations in fuel costs and other factors, so let’s keep it simple and layer these two related factors together:

And because I’m a nerd, here’s a chart.  The green line shows the total fuel expenses (on average per month): 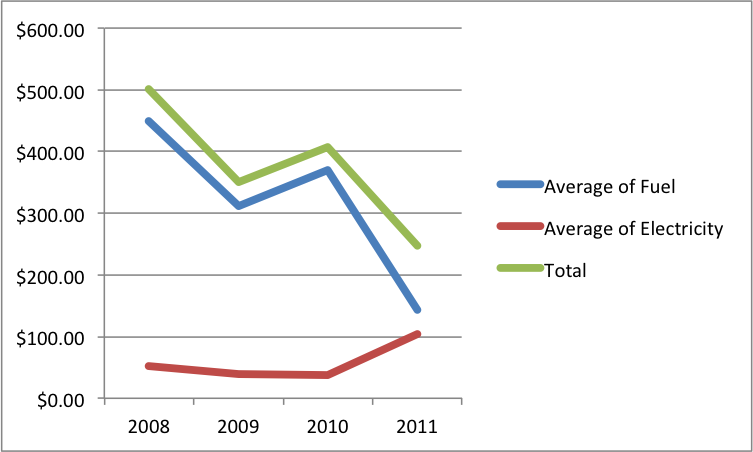 Awesome.  If you compare the average total fuel expenses in 2011 vs the prior three years, it turns out we’re saving about $2064 per year.  Not bad!  This doesn’t even factor in the cost savings we get in maintenance costs for the Leaf.  No oil changes, no belt replacements, no tune-ups.  Just tire maintenance.  Hooray!

Ok this one surprised me.  I went in with the assumption that since we’re eating at home more often, we must be saving a ton of money.  Turns out we’re not saving as much as I thought.  Let’s look at the math:

Things to consider on this one is we do have one extra person in 2011 and while her food isn’t terribly expensive, we do buy formula for her and we do make her food, which is additional costs.  I might go back and double check this, though.  It really just doesn’t make sense to me because we’re really not eating out THAT much, or it least it feels that way.  So no real savings there, unless you just want to compare 2010 to 2011, then we’re lookin’ good.  Seriously, what happened in 2010?  Oh right, I was pregnant.  Did I really eat an extra $200 in food?  If so, where did all that food go?  I only put on 22 pounds of baby weight!  If we compare 2008-2010 average expenses vs. 2011, we have saved about $771 so far this year.

If I could have, I would have breastfed my baby exclusively.  But she had some allergies and an irritated stomach that led us to feeding her some formula.  Some very expensive non-allergenic formula.  Pretty much the most expensive formula that’s out there.  We’ve been lucky enough that it wasn’t so bad that she had to be fed exclusively formula.  We’ve been going half formula/half breastmilk for about five months now and now I’m reducing that to only about one bottle of formula a day, the remainder breast milk.  So let’s compare.  I’m running a little short on time – baby is napping and I still need to shower, so I’m going to cheat a little and use some generic numbers.  Based on my calculations, if we fed our baby only formula, it would cost us about $8 per day to feed her.  But instead, we EBF (exclusively breast fed) for about four months and then did approximately half time for the next five.  So if we had exclusively formula fed, it would have cost us:

Ok now I’m really going to cheat cuz I know my free moments are numbered.  According to my favorite homemade babyfood website, the cost savings for making your own baby food is about $.23 per ounce.  We go through about 6 ounces a day and have been feeding Miss K solids for the last three months so:

Not a ton, but still some!

Uh…let’s not talk about this one quite yet.  My addiction has not saved us money yet.  🙂  Baby’s up!  Gotta go (how convenient)!