Miss K’s been doing an interesting thing over the last week or so.  Wait.  Hold up.  Before we get too far, I should disclose that this post is going to be about “going to the bathroom.”  And in particular, it’s about my kid “going to the bathroom.”  It may not be of interest to you or you might find it gross so I just thought I’d tell you now so that you can stop reading.  I won’t be offended.  Poop isn’t something I was comfortable talking about until I had a baby.  Seriously, I probably said the word poop less than five times in the entirety of my twenties.  So ya, I don’t mind if you stop reading.  I’ll just see you tomorrow.  Ok?  Ok. 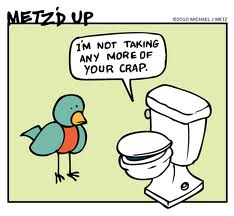 Back to the subject at hand.  For the last week or so, I’ve been taking Miss K. to the bathroom and sitting her on the toilet and she goes #2.  If she were eight years old, I would be a weirdo for mentioning it.  But she’s not.  She’s eight months old.  And pretty much everyday, she’s been using the toilet.  And we’re both amused.  Here’s what happens – she’ll be sitting there in her booster seat or playing and all the sudden, she’ll stop what she’s doing and start staring of into space and sometimes she grunts a little.  So then I take her to her bathroom, take off her diaper and sit her on the throne.  Sometimes she just goes and sometimes I grunt to remind her why she’s there.  Next thing you know, she’s going.  It’s hilarious because she’s so happy sitting there. She looks around and smiles at the shower, the toilet paper, the lights in the bathroom.  And she goes.  Sometimes she pees too.  I know it’s not conventional in our society; in the US we depend on our diapers for usually 2-3 YEARS but in other countries, they practice what’s called Elimination Communication.

I started reading up on this because as much as I love gDiapers, really if I can reduce the number of dirty diapers to clean, everyone wins.  According to http://www.diaperfreebaby.org/, Elimination Communication (EC) is “a gentle, natural, non-coercive process by which a baby, preferably beginning in early infancy, learns with the loving assistance of parents and caregivers to communicate about and address his or her elimination needs.”  When I read this, it made me laugh a little.  The thought of coercing my kid to poop seemed a little ludicrous but then when I thought about it, potty training is kinda that.  Poop when and where I want you to.  But if I can get her comfortable on the potty before she knows any better, then there’s no trauma in learning to use it.  Actually she’ll never really need to be potty trained. 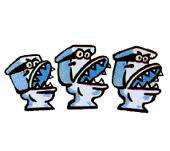 According to the site, it says that babies can start communicating their elimination needs early on and don’t need to wait until 2-3 years.  Basically parents and children learn cues from one another that say “it’s time.”  It went on to say that babies often need to pee after nursing or drinking their bottle.  So I think I’m going to start trying to take her to the bathroom after each feeding and see if she’ll go.  I like the idea of her not having to sit in a wet diaper or a dirty diaper.  One of the things that I did like about using disposables was that we used the kind that had a wetness indicator.  It let me know as soon as she had peed or pooped so I could change her out quickly.  With cloth, you change more frequently but you don’t know when she’s doing the deed.

My mom tells me that EC is what they do in India (or at least they did before disposables became common).  Basically after a baby is done eating, you take them out and let them pee and if they’re regular, you know approximately when they’re going to poop.  Of course, you can’t always predict when they’re going to go so a baby would still need to be in diapers (in India, I guess they used cloth for a long time) but even if you catch them before they go even 75% of the time, you’re not ending up with wet clothes or dirty diapers most of the time, right?

According to the diaperfreebaby.org site, I should leave my baby diaper-free at least part of the day.  I don’t think I’m quite ready for that so I’ll ease into it, I think.  If I can get her to pee in the potty a few times a day, I’ll give it a try.  I dunno.  Why not try?

It really cracks me up how amused she is sitting on the potty.  I know some kids are seriously scared of the toilet and potty training is such an ordeal.  I don’t know if this will work for us, but I like the idea of skipping it or making it so that it’s not a big deal. Maybe this is just a temporary phase and soon she’ll go back to wanting to be in her diaper all the time but for now, I’m-a goin’ with it.