Like everyone else, we’ve been embracing the trend to bring your own bags to the grocery store.  I used to bring paper bags back to Ralph’s and Trader Joe’s because they were just piling up like crazy and I hated just throwing them out.  Trader Joe’s would enter you into a raffle for a gift card (I must have entered 75 times and nuthin’. Nada. Zip. Zilch) and Ralph’s gives you a 5 cent discount for each bag you resuse.  Not bad, but then TJ’s started selling the canvas and plastic reusable bags so I bought a couple of those.  Then I would promptly forget to take them with me and now would have reusable bags plus the paper bags.  So I’ve been working on that.  We pretty much always take the reusable bags to the farmers market and I probably take the reusable bags in with me to the market 75% of the time.

Where I fail usually is when I go to retailers other than grocery stores.  I never have a bag with me at Target or Macy’s.  If it’s something small, I try to carry it in my hand or in the stroller but I’ll admit it makes a bit of a mess because often it ends up strewn all over my car.  Anyhoo, I want to do better.  I want to really cut down on the number of bags we bring into the house because they clutter up my home and end up making more waste than we need.

I do often re-use the bags to line our garbage cans throughout the house and sometimes I keep a couple bags in my diaper bag for when I don’t have my wetbag to store wet diapers in but other than that, I find myself throwing them away or recycling them.  So why not do something about it?

I started looking for some shocking facts about how evil these things are because I’m feeling a bit like a drama queen tonight.  Baby woke up FOUR (count ’em FOUR) times last night.  I’m tired and have been eating some serious sugar to get me through the day.  I’m feeling a little sick at this point but wait.  I may be wandering off topic now.  Regroup.

Here’s what I found on envirosax.com (keep in mind they make plastic bags for a living, so take it with a grain of salt):

So some of these seem hard to believe but no matter how you slice it, we can do better.  The good news is that towns across the nation are starting to ban them.  Now my little family of three doesn’t consume thousands of bags a year but we too can do better.  I don’t have a baseline of our usage so I’m going to set a goal around keeping our usage small.  So let’s try.

Reduce the number of one-time use bags that I bring into the house to just 15 bags a month.  That might sound like a lot but keep in mind that this will include produce bags (which I’m using more of – yay!? or boo?  I dunno.), shopping bags from the mall/target/grocery stores, bags from when we pick up food, etc.  I’ve easily brought home 15 bags of just produce and groceries in one mere week.  And the holidays are a-comin’ so there will be more shopping going on.  If this goal is too lofty or too easy, I’ll readjust in a few months.  We’ll start in October.

Well, I have bags that I use at the market.  Because I’m always forgetting them when I need them, I need some strategies.  Here are some things that I think will help: 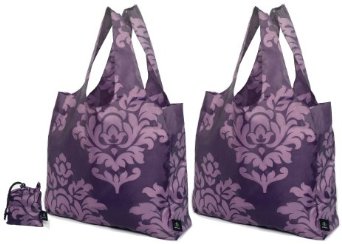 What do you do to limit the number of bags you use?