Now that she’s on solids, I make Miss K’s baby food (for the most part).  She had allergies early on so we waited until she was six months old to start her on solids.  I don’t know why it was so confusing to figure out what to feed her, but it was for me.  I wasn’t sure how much to feed her, and didn’t know how to tell if she had too much or not enough…I read that her first bites should really only be a sliver of a teaspoon – she seemed like she wanted more!  So like many things in being a mom, there was a lot of trial and error.  Right now my biggest confusion is around how much she should be eating.  I try (emphasis on TRY) to make her one fruit, one vegetable and one grain per day.  Here are the kinds of things we’ve been eating (Miss K is eight months old)

Wow.  Now that I look at the list, she’s actually tried quite a few different foods.  Yay for us!  I have to say, it’s not as difficult as I thought it would be to make her baby food.  It’s harder trying to figure out WHAT to feed her and how much is appropriate.  A fantastic resource that I found is: http://wholesomebabyfood.momtastic.com/.  The site has all kinds of great information on it and has been tremendously helpful to me.  I’ve read that making your own baby food is also economical but I don’t know that it’s necessarily true.  I do like that I can feed my baby a variety of fresh foods.  I especially like giving her fruit when it’s in season, like blueberries, nectarines and peaches.  Blueberries and avocados are super foods and I don’t think you can get those in jarred baby foods, can you?

Considering she typically doesn’t eat more than just a quarter cup of anything at any one sitting, it’s ironic how many tools I have to make her food: 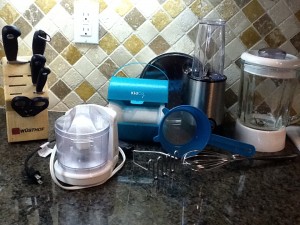 And I didn’t even bother taking down the food processor.  Sometimes it’s just a fork and a bowl.  Lately I’ve been using the bella blender the most.  It’s like a magic bullet knock off.  I use it to pulverize oats before cooking them, puree steamed vegetables, etc.  I like it because it’s small, powerful, and easy to clean up.

Since she’s now interested in fruit, we’ve been giving her selected fruits in a mesh feeder and letting her go to town.  The one we have looks like this:

It’s awesome.  She loves it, although depending on the juiciness of the fruit, it can sometimes get a little messy.

Miss K. doesn’t always like the food I make her.  This is especially frustrating when it took me a while to make it or it made a mess or I ended up using multiple tools to get it right.  So I’ve been experimenting.  I learned that she doesn’t like avocados or apples on their own too much but put them together and WOW! it’s amazing – loves them.  Apparently it can take up to 10 tries before a baby likes a food enough to want to keep eating it.  I don’t think I’d try a food 10 times if I didn’t like it but for her sake I’ll keep trying.  I sometimes wonder how this kid could be mine…she loves squash.  And oatmeal.  All I can say is ewww.

Not all food sits well with her either.  She LOVED zucchini, sucked it down like there was no tomorrow.  But then I realized it was constipating her (did I just make that into a verb?  Is that grammatically correct or am I making up words again???  I dunno.  I don’t want to research constipation any more than I have already).  So I tried peeling it first and that seemed to help.  After eating avocados the first time, she seemed to get a bunch of bumps on her face, indicating that maybe there was an allergy.  I follow the three day rule as best I can.  This says that you should wait three days before introducing a new food to ensure that there’s no allergy.  Miss K. suffered from allergies early on (apparently she was allergic to the foods I was eating and since I breastfed, she had terrible inflammation in her gut), so I’m cautious.  But so far, it’s going well.  If she doesn’t like something, it’s ok.  The majority of her nutrition comes from the breast milk and formula I feed her.  I just want to make sure she’s getting enough calories, iron, and protein to support her in her growth as she’s more active.

In the spirit of full disclosure, I have fed her a few store bought foods – I bought the rice cereal and some apple sauce once.  I just checked to make sure there was no sugar added to the apple sauce and bought an organic offering from Trader Joe’s.

I like making her food.  It’s another one of those things that’s relatively easy and just makes you feel proud of yourself.  I’ll post some of the simple recipes I’ve used in the upcoming days.  I’d love to hear what you feed your little one (tee hee…as if anyone reads this blog besides my husband and me).