I cloth diaper my baby.  Or more specifically I hybrid diaper my baby and most of the time, I use cloth.  Huh?  Ya, there’s this whole crazy cloth diapering world that I didn’t know existed.  It’s the like The Secret World of Og – remember that from Saturday morning cartoons (you might if you grew up in the eighties and watched ABC)?  If you had told me a year ago I would be obsessed with diapers, I would have laughed in your face and then slapped you silly.  Ok, not true – I’ve never been the violent type.  But I am obsessed with gDiapers.

Look at how cute they are!!! 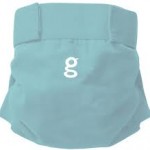 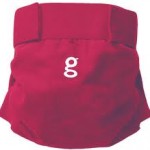 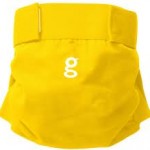 Why oh why would I want to deal with the mess of a cloth diaper?

For some reason, the idea of creating so much waste that will just sit in a landfill has never sat well with me.  It’s disgusting and terrible for our earth.  The materials in a standard disposable diaper take 500 years to decompose.  And a baby goes through something crazy like 5000+ diapers in its lifetime.  And there are billions of people in this world.  You see how this may be a problem.  Ironically, before I had even really considered using cloth, my husband and I used to joke about how I would quit my job and I better stay home with the baby and wash her dirty diapers…by hand.  Ironically, I did quit my job and here I am, doing a load of dirty diapers (in the washing machine, people!) every few days.  With disposables, they HAVE to be full of chemicals to work well.  I’d rather not put that on my baby because there is an alternative.  So I started looking and found gDiapers.

Why did I choose g’s?

I like gDiapers because they’re versatile (I use cloth at home and flushable refills while traveling) and you don’t have to use their gCloths.  You can make inserts that work for you – I made some for less than $1 each that work great.  I also like the way they look – super cute colors, and they don’t give my baby a huge bum!  The velcro vs. snap works for me too – it lets me adjust exactly to my baby’s size and I think they’re easier to stuff than some of the other diapers.  I also now love the company – they’re a small operation with less than 20 employees, (I think) and they have outstanding customer support, a seemingly great culture, and they stand by their products.  For example, I had a velcro tab come off in the wash within the first few months of owning my pants.  I wrote them and they sent me a whole new pant with a HAND WRITTEN note!  I would never dream of doing that with my own clothing.  I feel good getting behind a company like that.

How do they work?

gDiapers are hybrid diapers made up of a cloth outer little gPant that have a nylon snap-in pouch into which you can load either a cloth insert or a biodegradable insert that absorbs your baby’s mess.  Phew.  Confused?  I was until I started using them.  Then suddenly it all made sense.  Let’s start from the outside and work our way in.  The little gPant is the super cute outside layer that is made of breathable cotton.  It wicks moisture away from the baby and comes in some fantastic colors and designs.  They come in several sizes:

These are general guidelines and sizing really depends on each baby’s height, girth, etc.  Our baby jumped into mediums at around 12 pounds and may never make it into larges.  (but because I’m addicted, I already have four awesome large gDiapers).

Inside the little gPant, you snap in a pouch that does the tough job of holding the mess in.  Little gPants typically come with one pouch and there are two sizes, small and med/large/xl.  So the good news is if you have a dirty diaper, you can unsnap the pouch and reuse the pant!  If it’s just a wet diaper, you can reuse both the pant and the pouch.

Inside the pouch goes an insert that absorbs the liquid.  gDiapers offers two inserts – either a biodegradable, disposable insert OR a cloth insert.  The biodegradable insert (gRefill) was what attracted me to gDiapers in the first place.  They come in two sizes – small and medium/large/xl.  They are super absorbent and can be flushed down the toilet.  Let me say that again.  You can flush these down the toilet!  So now you can send poo where it’s meant to go, be good to the earth and not have to deal with poopy diapers any more than you would a disposable.  Did you know it’s illegal to send poo to the landfill in some states?  You can also compost wet diapers and they will break down in a couple months.  Not bad compared to the 500+ years it takes for a plastic diaper (ONE PLASTIC DIAPER) to decompose.  Or you can just toss it like you would a disposable.  Nice, huh?  Alternatively you can use cloth to stuff the pouch.  gCloths are made of microfiber and hemp and are meant to be washed and reused. They come in two sizes – small and medium/large/xl.  They’re super soft against baby’s skin and are compact so baby’s trunk doesn’t as much junk in it as most cloth diapers do.  gCloths are a bit pricy but they’ll last for a long long time.  If gCloths aren’t for you, you can stuff them with flats, prefolds, make your own inserts…heck, if you needed to, you could put paper towels in there and get by (don’t do that though – it’s not nice to baby’s bum).  So versatile!

One reason why people cloth is that it is (in general) less expensive than disposables.  The thing with cloth is that you have to pay for the diapering up front.  With gDiapers, if you used the biodegradable gRefills, it would likely be more expensive than using traditional disposables, but not by much.  I would be willing to pay a little extra for this.  The crazy part about gDiapers is that they have a pretty good resale value.  I’ve actually sold some for more than I bought them for because they were highly sought after.  Crazy, right?  Ya, people will pay $75 for a USED diaper.  That a baby has pooped in.  Nutso.  But these darn things are soooo addictive.  But I digress.  Little gPants retail for about $18 and you can get two packs for $27 at Babies R Us. I currently have 19 little gPants and have spent $216 for them, which averages to $11.35 per diaper.

If you choose to use cloth inserts, you will definitely come out ahead in the long run.  gCloths are a little on the expensive side and retail for $5 each.  Depending on how often you want to do laundry, you’ll need 18-32 cloths.  I use a combination of gCloths and homemade inserts.  I’ve spent $66 on these for an average of $2.64 per insert.

I also buy gRefills for traveling when they’re a good price – on average I’ve spent $.25 per gRefill.

Because I’m such a nerd, I’ve kept meticulous records of how much I’ve spent.  My primary goal for using gDiapers isn’t to save money, but it’s a great bonus.  Here’s how I calculate my break even (and please note that I’m conservative with everything.  $.18 is the BEST price I’ve found for disposables and there are definitely days where I used more than 7 diapers per day):

Total $ spent on gDiapers (pants, gRefills, inserts, liners) / price per disposable ($.18) = number of disposables I could have bought with amount spent on g’s.

With this calculation, my break even is 10 months.  If I use these diapers for more than 10 months, I will have saved money compared to if I had bought traditional disposables.  But let’s keep a few things in mind: first, I’m addicted so I have more gDiapers than I need and also have a few diapers that cost extra because they’re hard to find or designs.  Second, they have a high resale value.  If I could get $5 per little gPant (and I’m confident I could – this is a SUPER conservative estimate), I would break even in 7.5 months.  I’ve already been using g’s for five months.  If I stopped buying g’s, I would essentially be diapering my daughter for free beginning in November through the time my daughter is potty trained.  Awesome, right?

As much as I love g’s, they’re not perfect.  There’s a definite learning curve and I almost gave up a few times.  You do have to deal more directly with the mess.  Due to my baby’s size or the way I was using them, I was getting a lot of leaks for a while and I was super frustrated.  It takes a while to get the hang of them but I will say – their customer service (diaper therapists) are a great help and their facebook fan page has a buttload (excuse the pun) of helpful moms who will offer up great advice.

They do have five different sizes and as your baby grows, you will need to buy more.  I never used tinies and only used smalls for a few weeks.  We’ve been using mediums for the longest time.  I’m hoping to never need XL’s but Larges are a big question mark.

When you use cloth, you have to care for them in a particular way.  They need to be stored so that they don’t stink up your home, you can only use specific detergents, and even then, they occasionally need to be stripped in order to do away with any detergent build up.  I had some ammonia smell in our cloths and have been working to try to figure out how to get the stinkies out.  Not fun but still worth it, in my opinion.

Because gDiapers have three different parts, they all have different needs in terms of washing requirements.  At first it’s overwhelming, but then it gets easier.  You also have to assemble a diaper every time you use it, vs. just grabbing a disposable.  Some people assemble their g’s ahead of time to avoid this.

So is it worth it?

Yes.  yes.  Yes.  yes.  I’m proud of us for using these and I feel good about keeping cloth next to my baby’s skin instead of all those chemicals.  I like that we’re not sending tons of nasty trash to the landfill.  I like that I’m supporting a company I believe in.  And I love that my baby’s bum is even cuter in that diaper.  I totally recommend them.